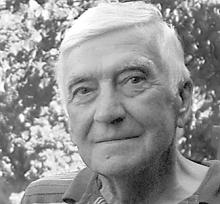 JOHN ALEXANDER GOODES John Alexander Goodes, born July 2, 1927, passed away peacefully at the Grace Hospice in Winnipeg on February 5, 2017 at the age of 89, surrounded by family. Married to Ollie Irene Goodes until her passing in March, 2014. Beloved father of Mark, Don and Jeff and grandfather to Terra, Gloria, Amy, and Ben. John was born into a Romanian community near Inglis, Manitoba. He earned a Bachelor's Degree in Science and Agriculture from the University of Manitoba and a Master's Degree in Economics from the University of North Dakota. In Winnipeg, he was employed at the Free Press, Red River College, and with the Provincial Government. Later he moved his family to Ottawa to work as a senior federal bureaucrat, becoming a member of the Advisory Council to the Minister of Employment. He retired in 1987. In retirement, he worked with CESO in Romania and Bolivia and wrote three books. John kept strong ties to his roots. He maintained the farm of his birth and would visit it and the local community frequently. He was a co-founder of the St. Elijah Pioneer Museum near Inglis, MB. He wrote a highly popular history of the early pioneers of the Lennard region, titled Where Money Grows on Trees. In the late 1990s he took his sons on an unforgettable trip to Romania to explore their family history. John also loved to garden and planted a large garden on the farm every summer even through his 80s. John will be remembered for his warm laugh, his sharp mind and pioneering spirit, his ability to tell a good story, and his frugal nature. He will be dearly missed by his family, friends and neighbours. Evening prayers will be at St. Elijah Romanian Orthodox Church in Lennard, MB on Tuesday, February 14 at 7:00 p.m. The funeral service will be held Wednesday, February 15 at 10:00 a.m. at St. Elijah Romanian Orthodox Church with interment following in the parish cemetery. Donations may be made to the St. Elijah Cemetery Fund. Remembrances and condolences may be emailed to braendlebruce@mts.net Braendle-Bruce Funeral Service of Russell is in care of arrangements. (204) 773-2747