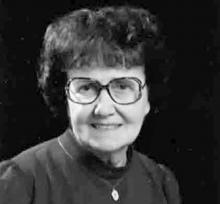 MARGARET BRAUN 1925 - 2017 On Wednesday, February 8, 2017 at Concordia Hospital in Winnipeg, MB, Margaret Braun aged 92 years went to her eternal rest. She is survived by her brother, George and his wife, Rose Braun and a sister, Sophie and her husband, Norman Lick. In heaven, she was planning to meet those who went before: her parents, Gerhard and Sara Braun as well as her brothers, Henry and Val and a very young sister, Sophie the first. Margaret's parents emigrated from Russia in 1923 and settled for a short time in Saskatchewan. This is where Margaret was born in the village of Waldheim on February 5, 1925. She was the third child in a family of six. In 1930, the family moved to Winkler where Margaret attended school and after completing grade ten, she found employment at a number of businesses including Janzen's Red and White, Winkler Co-op Creamery and the Winkler Co-op store. Margaret was a woman of faith and in 1945, she was baptized by Bishop David Schultz and became a member of the Winkler Bergthaler Mennonite Church. In January of 1957, she moved to Winnipeg to take on an office job with Blue Cross. When the government took that over, she continued on as a government employee and finally retired in 1989 after 32 years of service. She continued to live in and enjoy her Winnipeg apartment and on most weekends, travelled to Winkler to help her aging mother. She was also a very generous auntie and enjoyed spoiling her nieces and nephews. MS was a part of her life for many years but it progressed slowly and she enjoyed a relatively active life for many years with many friends and interesting hobbies. She created special cards for family and friends for every and all occasions which was her way of expressing love and caring. She reached out to many lonely and grieving people as well. God was a very important part of her life and she enjoyed a close relationship with Him and in her later years that became more meaningful and stronger. She confessed that she walked and talked with Him through each day. A graveside service will be held at 11:00 a.m. on Saturday February 18, 2017 at the Winkler Cemetery. If friends so desire, donations may be made in Margaret's memory to the Faith to Love By Broadcast 35 Whidden Gate., Winnipeg, MB, R3P 1Y1. Wiebe Funeral Home, Winkler In care of arrangements wiebefuneralhomes.com