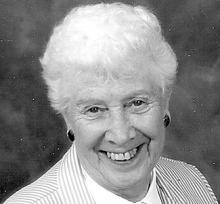 ALICE (FRAN) FRANCES THOMPSON October 28, 1927 - February 11, 2017 With family be her side, Fran passed away peacefully in the early hours of Saturday, February 11, 2017. Fran was born October 28, 1927 to Ruby and Arthur Thompson in Port Arthur (Thunder Bay), Ontario. Left to cherish her memory are her sister Evelyn Ruth Gordon-Hicks, stepdaughter Lindy Kalynchuk (Calum), granddaughters Stephanie Godard (Wellesley), Tenisha Kaminawaish, grandson Quinten Sanders, her aunty Barbara and uncle Thomas Gustafson, niece Peggy-Anne Gordon, nephew Arthur Gordon and countless cousins. She was predeceased by her parents Ruby and Art Thompson, stepson Freddie Kalynchuk and special friend Alex Kalynchuk. Fran lived a full, adventurous and exciting life, growing up in Jellicoe, Ontario, moving on to Flin Flon, Swan River and Winnipeg, and finally settling in St. Georges, Manitoba. During her life, she acquired a Home Nursing certificate, a pilot's license, worked with a veterinarian, jumped out of airplanes, owned a successful accounting business and campaigned hard for the NDP. She was also the Reeve of the L.G.D. of Alexander for the periods of 1977-1980 and 1983-1986. She enjoyed gardening, camping, friends, and the "odd" cold OV. Celebration of Life will be held at the Pine Falls United Church, 5 Walnut St., Pine Falls at 2:00 p.m., Sunday, February 19, 2017. In lieu of flowers, donations may be made to the Heart & Stroke Foundation of Manitoba, 200-6 Donald Street, Winnipeg, Manitoba, R3L 0K6. SOBERING FUNERAL CHAPEL & CREMATORIUM, Beausejour 268-3510 or MB Toll Free 1-877-776-2220 www.soberingfuneralchapel.com