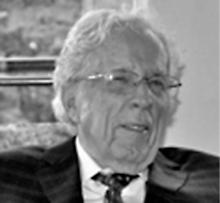 NORVAL CAMPBELL YOUNG September 24, 1927 - February 14, 2017 It is with great sadness that we announce the passing of Norval Campbell Young. Norval is survived by his loving wife Ivy, son Brent (Janice), daughter Loree (Rob), son Scott (Kristin), and his seven grandchildren: Brandon, Steven, Kirsten, Ryan, Gavin, Gillian, and Jack. He was predeceased by his parents, his brothers Ross and Keith Young, and his sister Gwen Nicholson. Norval was born on a small mixed farm at Glenella, Manitoba in 1927 and grew up during the height of the Great Depression. He described his family as poor and hard working, and Norval applied himself to his academic studies (after his chores were completed). He graduated high school at Neepawa, Manitoba and was the first man in his family to attend university. At the University of Manitoba he earned a Bachelors degree and then a Masters degree in the Science of Agriculture. He had a lifelong appreciation of his education, actively supported his alma mater, and insisted his family pursue their own education. Following university, Norval joined Feed-Rite Mills as the company's first animal nutritionist and professional agronomist. Norval worked at Feed-Rite for the next 40 years, initially in a technical and marketing role, and for the last 20 years of his career as Chairman of the Board, President and CEO, and major shareholder of the corporation. Under his leadership, a small local business was transformed into an industry leader in the animal feed industry with manufacturing plants and outlets across Western Canada and into Ontario. He looked back fondly on those years, the many challenges he enjoyed, and the special relationships he developed with his customers and his employees. Despite the demands of a challenging business career, Norval was foremost a family man. He had a wonderful marriage of over 54 years to Ivy whom he adored. The cottage at Clear Lake, Riding Mountain National Park, was a focal point for summer gatherings for the Youngs. Fishing and golfing were common family activities and the Sunday golf game could occasionally get competitive. Norval enjoyed wildlife and the outdoors. He and Ivy would often venture out for a drive near dusk to Moon Lake to see a bear or a moose, which was always exciting. Along with family, there always seemed to be a dog somewhere in the mix. An annual holiday with Ivy to Nihi Kai on Kauai later translated to their winter home in retirement, and the rest of the family was always welcome. When in Winnipeg, Norval and Ivy liked nothing better than attending the symphony or the theatre, and they rarely seemed to stay home. As a father, Norval seemed to never miss an important music recital or other significant event that involved the kids. He was always accessible to provide sound and patient counsel and supported his children's aspirations and endeavours. As a grandfather, he took great joy in his grandchildren and they will miss their Grandpa. Norval never forgot his roots - he always considered himself a 'farm boy from Glenella' and was quick to remind us that there is no substitute for hard work. He was a kind, generous, and principled man who made the most of his life. He was a wonderful example for his family and has left a great legacy for us. We will miss him dearly. A reception for family and friends celebrating Norval's life will be held from 2:00 p.m. to 4:00 p.m., Saturday, March 4 at the St. Charles Country Club, 100 Country Club Blvd., Winnipeg. In lieu of flowers, donations may be made to The Heart & Stroke Foundation of Manitoba.