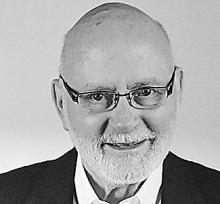 WILLIAM (BILL) DOUGLAS SUTHERLAND 1936 2017 Bill passed away peacefully, February 16, with his family by his side, at the Southeast Personal Care Home. Bill will be remembered and sadly missed by his loving wife Arlene; children, Laurell (Ron), Donald (Elisenda) and Kim, and by his grandchildren, Alastair and Ellyn (Fraser) McTavish and Tasha and Damon Campbell, and of course by his buddy Oliver. Bill is survived by his sisters and brothers-in-law, Alice and Gordon Palmer and Janet and Bruce Bodner and their families, by his sister and brothers-in-law and all the relatives from Arlene's extended family. Born October 30, 1936, Bill grew up in "The North End" of Winnipeg. He had fond memories of his early years with friends and cousins. He was active in his school years, and graduated from St Johns "Tech" at the young age of 16 and then moved on to attend the University of Manitoba. Bill and Arlene were married in 1959, and soon started a family together. They bought their first home in Crescentwood, and were true partners at home repairs, renovations and yard work for many years! There are wonderful memories of family times, of road trips across Canada, camping expeditions and of course the many years spent at the cottage at Moose Lake. His career was a great source of pride for Bill, and he spent 30 years as an educator and administration in the drafting department at Red River College. He was well spoken and highly regarded, and maintained strong connections with many of his former colleagues. In spite of the onset of dementia, he really looked forward to attending his Heritage Group meetings, and we are grateful to Lucien and John for getting him there. After many years of involvement with CTTAM, Bill became the Executive Director upon his retirement from the college. He worked hard towards achieving the creation of the Certified Applied Science Technologists Act and was very involved with developing the accreditation process of college programs. He did make time for enjoyment in retirement as well, and he and Arlene travelled to Scotland and to many Caribbean locations until travel became too challenging. Selling his home in Lindenwoods and moving to 65 Paget was difficult for Bill. Although he really missed his basement, the four years at Paget have been filled with new friendships, good times, and support when things were difficult due to changes to health. Over the years Bill always enjoyed a round of golf, loved his curling, both playing and watching, and was always up for a good game of cards. He was always a good sport when it came to posing for silly pictures whether it was with pets, grandchildren or on his own. He was a perfectionist (aka Millimeter Bill) and personally undertook the land surveying when they bought and built their home in Lindenwoods. He always had a good story to tell with his own special sense of humour. He will be missed. Rest in peace. To the wonderful people at Southeast Personal Care Home, we cannot thank you enough for the support and care provided to Bill and to our family over the past two months. A celebration of Bill's life will be held Thursday, February 23, at 2:00 p.m. at Chapel Lawn Funeral Home, 4000 Portage Avenue. In lieu of flowers donations can be made in Bill's memory to Alzheimer Society Manitoba or D'Arcy's ARC (Animal Rescue Center). For those who wish to sign the online Guest Book please visit our website. CHAPEL LAWN FUNERAL HOME www.chapellawn.ca  204-885-9715.