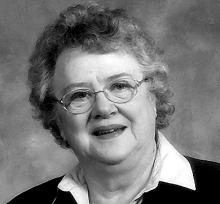 CHARLOTTE LOUISE OLESON Passed away at the Glenboro Health Centre on Sunday, February 19, 2017, at the age of 84 years, Charlotte Louise Oleson (nee Kingdon), of Glenboro, MB. Charlotte grew up on the farm in the Clanwilliam district. She attended Crocus School and graduated high school from Minnedosa Collegiate Institute. She then attended Normal School in Winnipeg. After graduating Normal School in 1951 she taught at Glenboro School from 1951 to 1953. Charlotte then embraced becoming a stay at home mom until Kelly started school. She re-entered the work force as a librarian for the town and then Glenboro Collegiate. Her first elected office was councillor in the Village of Glenboro in 1977, including time as Deputy Mayor. First elected to the Manitoba Legislature in 1981, she served until 1990. During this period Charlotte was appointed Minister of Community Services and Minister of Employment Services and Economic Security with responsibility for the Status of Women. The Ministries were reorganized in 1989 when she became Minister of Family Services. She also served as Chairman of Lakeland Regional Library Board, Director of the Manitoba Library Trustees Association, Vice-Chair of the Cypress Planning District, member of Glenboro and area Historical Society, President of the Glenboro Development Corporation, Chair of the Friends of Spruce Woods Park and the Criddle-Vane Homestead Committee. Charlotte was an active member of the Glenboro St. Stephen's Anglican Church and Honorary President of Manitoba Ladies Curling Association. She was a board member of the Manitoba Human Rights Commission and the Manitoba Motor Transport Board from 1977 to 1981. Charlotte was an active member of the Progressive Conservative Party of Manitoba for over forty years, including several constituency leadership roles. She served as a Director of the federal Progressive Conservative Women's Caucus and was awarded an honorary life membership in the Manitoba Progressive Conservative party in 2000. She was awarded the Canada 125 medal in 1992. Charlotte leaves to mourn her passing her loving husband of 63 years, Stan; sons Chris (Kristine) of Regina, SK, Davin (Janice) of Brandon, Kelly of Winnipeg; five grandchildren, Jennifer (Don), Eric (Cassie), Asia, Johanna and Alycia; and by two great -grandchildren, Elliot and Finley. She is also survived by three brothers and three sisters, Maurice (Mary) Kingdon of Minnedosa, MB, Hazel (Bob) Jelfs of Foxwarren, MB, Erle (Alice) Kingdon of Virden, MB, Kathy (Aymer) Lundin of Comox, BC, Gerry (Sandra) Kingdon of Vilne, AB, Peggy Hawes of Creston, BC; as well as numerous nieces, nephews and friends. Charlotte was predeceased by her parents Clarence and Elsie Kingdon. A Celebration of Charlotte's life will be held on Thursday, February 23, 2017, at 2:00 p.m. in the Willmor Chapel, Glenboro, with Sharon Hamilton officiating. Interment will take place in the Glenboro Cemetery. Friends that so desire, memorial donations can be made in Charlotte's memory to the Glenboro and Area Foundation, Box 147, Glenboro, MB R0K 0X0. Online condolences may be extended to the family by visiting www.willmorchapel.com Jamieson's Funeral Services of Glenboro-Holland in care of arrangements 204-827-2480