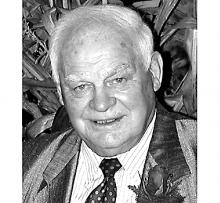 GEORGE B. SCHREYER May 8, 1920 - February 17, 2017 In his 97th year, after a long, full and happy life encircled in Love, our dad, grandpa and great-grandpa, went to be with our Lord and Saviour. He is now reunited with the Love of his Life, Lil, and daughter Beverly Nicol. As per Dad's wishes, cremation has already taken place. Both Prayers and Mass will be held at St. Theresa's Church, 3597 Main Street in West St. Paul, with Father David Kowalski officiating. Prayers will be held on Tuesday, March 7, 2017 at 7:00 p.m. Mass of Christian Burial will be on Wednesday, March 8, 2017 at 10:30 a.m., with the Eulogy immediately following. In lieu of flowers, donations can be made in Dad's memory to St. Theresa's Church or to a charity of one's choice. Longer obituary to follow in next Saturday's edition. Glen Eden Funeral Home & Cemetery 204-338-7111