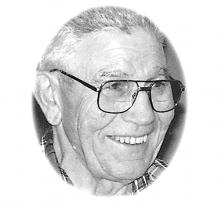 BEVERLY WAYNE BOWLES Beverly Wayne Bowles of Souris, Manitoba passed away at Souris Hospital on February 24, 2017. Wayne was born in Souris on November 14, 1938 to Allen and Reita Bowles. Wayne grew up on the family farm in the Riverview School District. He completed his schooling in the Souris School. At a very young age, he exhibited a love of animals and nature. His patience for fixing and rebuilding kept him entertained for hours. Following school, he began working for the McCabe Elevator Company, later UGG, building and repairing elevators across Manitoba and Saskatchewan. His superintendent described Wayne as a young man who very skilled at his craft. While working on the elevators a new school 'marm' arrived in the district, 1959. Wayne and Evelyn (Bond) were married in August 19, 1961. Wayne continued to work for UGG until his father passed away in 1964. Turning down a promotion, he decided to return to the family farm so he could spend more time with his young family. He used the skills he learned while working on the elevators to build a home for his family. This farm has been in the Bowles family since 1889. Wayne and Evelyn worked hard to build a successful farming operation. His mechanical skills and patience were great assets enabling him to do his own maintenance and repair work. Due to health issues, Wayne semi-retired in the late 1990s. He continued to work the home quarter until the last few years. Hunting and fishing were life long passions. The family is grateful to his hunting buddies for enabling him to continue his passion until very recently. Wayne was thrilled to share his love of hunting and fishing with his grandchildren. His beloved golden retriever, Max, was his constant companion on his many scouting trips and patiently waited in the truck at the local coffee shop. Left to mourn are his wife, Evelyn, and two daughters, Diane Sexton and Donna McCausland (Dan); his grandchildren Andrew and Michelle Janz, Jodi and Allison Sexton, Madison and Melissa McCausland; his brother, Douglas Bowles and several nieces and nephews. He was predeceased by his daughter, Sharon Bowles, son-in-law, Marty Sexton, baby granddaughter, Nicole Sexton and his parents, Allen and Reita Bowles. A funeral service was held at Souris St. Paul's United Church on Thursday, March 2, 2017 with internment at Souris Glenwood Cemetery. Urn bearer was Andrew Janz. Donations in memory of Wayne Bowles may be made to Prairie Mountain Health, c/o Souris Palliative Care, Box 10, Souris, MB, R0K 2C0. Kowalchuk's Funeral Home of Souris was in care of arrangements.