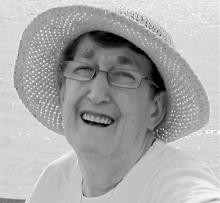 VIOLET HOPE Born: May 29, 1933 Died: February 28, 2017 It is with heavy hearts we announce the sudden passing of Violet Emily Hope (Noseworthy). She died peacefully at 83 years old, surrounded by family, at St. Boniface Hospital in Winnipeg on February 28, 2017 at 3:42 a.m. Mom leaves behind her six loving sons: Dan (Susan), Allan (Harriet), Ron (Sherry), Tom (Sherry), Glenn (Tammy), and Ken (Julie); along with her 10 grandchildren: Jeremy, Amanda, Nicole, Chris, Kelly, Terry, Jessie, Megan, Zach and Maggie; and four great-grandchildren: Austin, Carter, Victoria and Baily. Mom also had a large extended family which included Erin, Erica (Kevin), Turner, Kolltin-Roy, Joe, Marina and Justin. She was predeceased by her parents Stan and Edith Noseworthy along with her sisters May Ficek, Joyce Ficek, and brother George Noseworthy. Mom was born in Kenora, Ontario on May 29, 1933. She moved to Montreal when her father Stan, who was in the Air Force, was transferred. In Montreal, Violet married Harold in 1954. They began their family with Dan, Allan, and Ron all being born in Montreal. The family moved west in 1960 and settled in Winnipeg where Tom and Glen joined the family. Violet's family of six boys was completed in 1970 when Ken was born in Teulon, Manitoba. When asked about her biggest accomplishment in life, she would always say "my boys." Mom was not only a hard worker her entire life, but a strong, tough and determined woman. She was a fighter and a force to be reckoned with. She was a self-sufficient and independent woman, and took pride in being able to do things for herself, even in her later years. Mom was known for her many interests - cards, puzzles, board games and yes, the occasional trip to a casino to try her hand at the slot machines. In fact, one of the highlights of her life was her trip to Nashville with her son Ron and his wife Sherry. She made the trip with two casted, broken wrists that were the result of a fall a few weeks earlier. It didn't matter to her though. Mom was going, whether or not she could use her hands. For her, it was the trip of a lifetime and no one - not even a doctor - was going to tell her she couldn't go. Mom also loved her bingo at the Fort Rouge Legion where she also was part of the Ladies Auxiliary. In recent years Mom also was an avid bowler and looked forward to her weekly outings at Park Alleys. Mom was the pillar of her large, extended family. Nothing made her happier than being surrounded by her children, grandchildren and great-grandchildren at Christmas and family celebrations. Family was the most important thing to Mom, and one way she showed this was by taking special care to remember birthdays and other milestones for each family member. She never left anyone out. It didn't matter how large our family became. Every person was special to her, and she needed to show them that. Mom loved to tell stories, to share memories and to laugh. She'll be greatly missed for her spirit and her love for life. A celebration of her life will be held on Friday, March 10 at 10:00 a.m. at Thomson "In the Park" Funeral Home, 1291 McGillivray Boulevard. Cremation has taken place, and interment will take place in Kenora in the summer. Mom will be laid to rest beside her mother, father and sisters just as she wanted. Our family would like to extend our sincere thanks to the staff at St. Boniface Hospital, for their wonderful care of both our beloved mother and our family. THOMSON "IN THE PARK" 204-925-1120 Condolences may be sent to www.thomsoninthepark.com