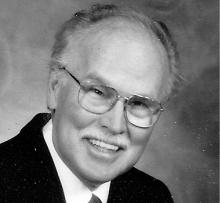 KEITH EDWARD MALCOLM Keith was born in Cypress River, Manitoba on May 9, 1930. After Grade 12 he attended the University of Manitoba and obtained his Bachelor of Science degree. He taught on permit for two years and returned to university to obtain his degree in Education. Keith and Rosalind were married in 1955 and settled in Elkhorn, Manitoba, where both taught school. In 1957 he became principal of Minnedosa Collegiate. In 1965, Keith spent three years in Kingston, Jamaica, followed by two years in Tanzania, East Africa, where he taught in Teachers' Colleges. In 1970, he returned to Starbuck, where he was principal of the K-9 school, followed by a secondment to the Department of Education for two years after which he returned to his role as principal in Starbuck until he retired in 1985. After retirement he was involved in several community projects, such as creating the Wayside Park in Starbuck, and also the Cemetery Board. He loved music and played the piano for a number of years for the United Church Dinner Theaters and for the local Vaudeville Shows. He loved his home in Starbuck and took great pride in it. Many happy times were spent travelling to warmer climates with friends and family, along with many camping trips. He is survived by his loving wife of 61 years, Rosalind; son John (Leslie) - Travis (Lindsay), Jason (Marlo), son Dwight (Bonnie), Brent, Stephanie (Scott); daughter Laurie (John) Cara, Jenna (Andrew), Niki (Tim); son Dale (Erin) - Genevieve, Rachel, Rebecca, Bridget and Grace - great-grandchildren Charlotte, Dane and Nevéa; his sister Margaret, and numerous nieces and nephews. A memorial service will be held on Saturday, March 11, 2017 at 2:00 p.m. at Thomson "In the Park" Funeral Home, 1291 McGillivray Boulevard, with Reverend Ron Vert officiating. In lieu of flowers, a donation in Keith's name may be made to the Alzheimer Society of Manitoba. THOMSON "IN THE PARK" 204-925-1120 Condolences may be sent to www.thomsoninthepark.com
Publish Date: Mar 8, 2017

KEITH EDWARD MALCOLM On Friday, March 3, 2017, Keith passed away peacefully at the Victoria General Hospital at the age of 86 years. A longer obituary notice will follow.