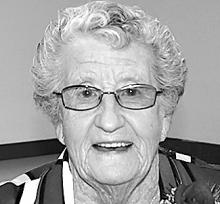 RUTH EILEEN MCCONNELL Ruth Eileen McConnell passed away peacefully on March 4, 2017, in Hamiota, MB, at the age of 87. Ruth was born July 11, 1929, the first of two children to David and Laura Rathwell, of Nesbitt, MB. She received her primary education in Minnewawa and Brandon, and graduated from Manitoba Normal School in 1949 before moving to Hamiota to fulfil a natural calling and teach Grade 1. Ruth married Elgin "Red" McConnell, a farmer in the Lavinia area, on October 4, 1952. They raised two sons, Kim and Wendel. Red and Ruth were proud to be progressive, third generation farmers of the McConnell Century Farm. In 1993 Red and Ruth retired from farming and moved to the town of Hamiota. Ruth loved her family, her friends and the community in which she lived. She was an organizer, an inspirer and a catalyst in the community. She loved to garden, dance, curl, play cards and games, bake, entertain and visit with friends and family. She loved her church, the Rebekah's and attending sporting events involving kids of all ages. And she loved to do her part in making the local community strong, vibrant and friendly. We are blessed to have so many memories of Ruth that we will cherish forever. Ruth is survived by her, son Kim; daughters-in-law, Carolyn and Bev; grandchildren, Jill, Mark, Ross (Kim), Jaclyn, Tori (Wendel); sisters-in-law, Audrey Rathwell, Eula Woods, Mick Little (Lloyd), Maureen McConnell, Marie McConnell; and brother-in-law Kent (Maureen), and numerous nieces and nephews. She was known to many as Mom, Grandma, Auntie Ruth and friend. Ruth was predeceased by husband of almost 64 years, Red; son Wendel; parents, David and Laura Rathwell; brother Wes Rathwell; brothers-in-law, Vern, Jim and Morley; sisters-in-law, Mavis Bray and Jean McConnell; and brothers-in-law, Ron Bray and Nelson Woods. Ruth was supported by numerous great friends. The family would like to reflect the contribution of many, including six Honourary Pallbearers (Grace Anderson, Nora Gray, Jean McKinnon, Vera Skayman, Joyce Short and Ethel Tinkler) and six Guardian Supporters (Susan Allen, Judy Brown, Sandra Cowling, Sharon Desrochers, Airdrie Knight and Karen Miller). A Service of Remembrance will be held on March 9, 2017 at Hamiota United Church, with Reverend Doug Martindale officiating. A reception for family and friends will follow at the Community Centre. Interment will be held at the Hamiota Cemetery. For those so desiring, donations may be made in Ruth's memory to Hamiota Palliative Care Program or Hamiota Chemotherapy Program, in care of Hamiota District Health Centre, Hamiota, MB R0M 0T0; or to the Manitoba 4-H Council, 1129 Queen's Ave., Brandon, MB R7A 1L9; or the Hamiota United Church, Hamiota, MB R0M 0T0. Messages of condolence can be shared at www.campbellfuneralhome.ca. Arrangements are in the care of Campbell Funeral Home, Hamiota. (866) 620-2744.