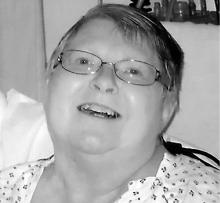 SHARON WILLIAMSON (KALYNIAK) Sharon Williamson (Kalyniak) of Winnipeg, MB passed away at the Riverview Health Centre on Wednesday, March 8, 2017 at the age of 62 years. Sharon is survived by her husband Arthur Williamson; mother Mary Kalyniak of Russell, MB; sisters-in-law, Donna Kalyniak of Russell, MB, Jean Williamson of Winnipeg, MB, brothers-in-law, Gord (Lorraine) Williamson of Treherne, MB, Howard (Florie) Williamson of Morinville, AB. She was predeceased by her father Mike Kalyniak, brother Ron Kalyniak and mother and father-in-law Les and Hazel Williamson. The funeral service will be held on Tuesday, March 14, 2017 at 10:00 a.m. from St. Mary's Ukrainian Catholic Church, Russell, MB with interment following in the Russell Memorial Gardens. If friends so desire, donations may be made to the Multiple Sclerosis Society. Remembrances and condolences may be emailed to braendlebruce@mts.net Braendle-Bruce Funeral Service of Russell, MB is in care of arrangements. (204) 773-2747