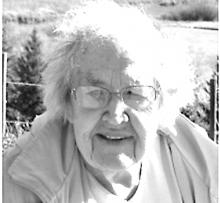 ALICE MAY BALL July 16, 1917 March 9, 2017 Alice passed away peacefully in the early morning hours, shortly after her daughter Beth and son Tom left her bedside. Mom, Grandma, GG (Great-Grandma) is survived by three generations of family who loved her dearly and will mourn her passing, while being blessed with fond memories and gratitude for having had this amazing woman in our lives for so many years. Alice's family include: her daughter Beth (Bruce) Kondratuk; son Tom; grandchildren, Tammy Kondratuk, David (Lesley) Kondratuk, Dana (Peter) Stam, Steven Ball, Kathryn Ball (Phil Lavallee), James Ball; and great- grandchildren, Tristyn, Mya Alice and Cloey Stam, Olivia and Kenzie Kondratuk and Merideth Lavallee. Alice was predeceased by her husband Gordon, in December 1999. Alice was born and raised in Bienfait, SK, the only child of Walter and Amy Vousden. Alice completed her Grade 12 in Estevan, SK and served in the R.C.A. F. (CPL) from 1942 to 1945. Alice and Gordon (who also served in the R.C.A.F.) married in January 1947 and enjoyed 53 years of marriage. After the war, Gordon and Alice established a hardware, furniture, appliance and implement business in Birtle. Mom worked with Dad and performed clerking, bookkeeping and various other managerial activities until their retirement in 1979. As well, Alice was active in several community organizations over the years. She was Worthy Matron of Artaban Chapter #16 Order of the Eastern Star for six terms, a member of the Donners Choice project and a member of the Royal Canadian Legion. Many of us remember her recitations of "In Flanders Fields" for several years at the Remembrance Day services in Birtle the last recitation was when she was 97 years old. In her retirement years, Mom enjoyed travelling with Gordon and her children and grandchildren to the east and west shores of Canada, the northern US states, Mexico, Hawaii, Alaska and England. Mom's favourite pleasures included just "to be" in her home and community, her grandkids, knitting, puzzles, drives in the country side, cooking and baking and Scrabble. Mom had a "the salt of the earth" hardy personality and strength of character. She was a role model and leader for all of us. A service to celebrate Alice's life was held on Monday, March 13 at Birtle United Church at 2:00 p.m. with interment at the Birtle Cemetery, with Linda Clark officiating. We have many amazing people to thank for the care and assistance given to our Mom over the last few years. Thank you Max Geras for the gentle and respectful care, guidance, fun, social support and fixing of things you provided faithfully over many years. Thank you to physicians, Dr. James Johnson and Dr. Dhaliwal from CancerCare HSC and to Dr. Pieterse from Russell, MB who cared not only for Mom's illness but also for her spirit. Thanks also to the home care workers, the nurses at Russell and Shoal Lake, and Monica Kehler who visited Mom when we could not be there. Thank you to those who helped to facilitate a beautiful and meaningful service for Mom; Linda Clark (Celebrant), the community choir and organist Elaine Kestirke, Jean Fouillard and the legion members, the staff of Braendle-Bruce Funeral Service, Doug Sansom for playing the bagpipes, and Ron Samchuk for musical support. Thank you also to the grandson pallbearers and honorary pallbearers, David Nettle and Max Geras. Donations in Alice's memory may be made to CancerCare (research for chronic lymphocytic leukemia) or the Heart and Stroke Foundation. Braendle-Bruce Funeral Service of Russell was in care of arrangements. (204) 773-2747