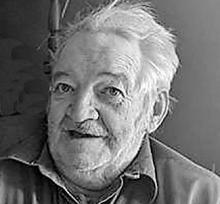 JOSEPH OMER RONALD (RON) CYRENNE March 24, 1939 - March 14, 2017 Ron Cyrenne, of Birtle, Manitoba, passed away due to many health complications at the Russell District Health Centre, Russell, Manitoba on Tuesday, March 14, 2017 at the age of 77 years. Ron is survived by his wife Donna (Miller), his four children Joseph, Dolores (Rob), Patrick (Janice), Michele (Darrel), and his seven grandchildren Todd (Leanne), Levi (Morgan), Lindsay (Katie), Kelly (Tamika), Gabrielle (Derek), Memphis and Christian, plus his nine great-grandchildren, and one due in June. Ron is also survived by his brother Guy and sister Gisele (Romeo), along with many nieces, nephews and cousins. Ron's funeral service will be held on Friday, March 17, 2017 at 10:00 a.m. from the St. Lazare Roman Catholic Church, St. Lazare, Manitoba. If friends so desire donations may be made to a charity of one's choice. Remembrances and condolences can be e-mailed to braendlebruce@mts.net Braendle-Bruce Funeral Service of Russell, Manitoba (204) 773-2747 in care of arrangements.