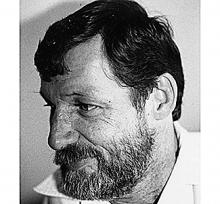 WAYNE CAMERON BARR 1941 - 2017 It is with sadness that we announce the passing of Wayne on Saturday, March 18, 2017, at the age of 75 years, after a brief illness. Born in 1941 and raised in West Broadway, Wayne was the first child of Lindsay Barr and Sheila Hagen. His parents nurtured his incisive intellect and wit, instilled in him a deep caring for others, and supported his determination to challenge assumptions, overcome obstacles, and be independent. In pursuit of his own spirituality, Wayne first left school and home at 16 to attend the Prairie Christian Training Centre in Ft. Qu'appelle, where he also began his practice of forging not just acquaintances, but lifelong friendships. In the 1960s Wayne lived frequently in Winnipeg where he had begun post-secondary education, but he also travelled routinely as a member of the Company of Young Canadians, and lived and worked in Toronto for several years. It was while posted to Halifax that he met and fell in love with Anne Weddige, and they were married in Saskatchewan in 1971. Following a stint in Montreal they relocated permanently to Winnipeg, where Wayne completed his Masters degree M.Ed. psych at the University of Manitoba, and also accepted a position providing counselling services to in-residence students. For many years Wayne also maintained a private counselling practice. Wayne and Anne were delighted to welcome the birth of their sons, Luke and Will in 1978 and 1985, and Wayne was very proud to celebrate the arrival of grandchildren Eli and Leo in 2010 and 2012. Sadly, Wayne was predeceased by the love of his life, Anne, in 2009. Wayne loved music, sports, the theatre, road trips, politics, the CBC, telling stories and most importantly helping others and his family. Wayne is survived by his sons Luke (Karlen, Eli, Leo) and Will (Lin), and his brother Grant (Emma, Graeme). A celebration to remember Wayne's life will be held at 6:00 p.m. on Friday, March 24, 2017 at Neil Bardal Funeral Centre, 3030 Notre Dame Avenue (across from Brookside Cemetery). NEIL BARDAL FUNERAL CENTRE 204-949-2200 neilbardalinc.com
Publish Date: Mar 23, 2017

WAYNE CAMERON BARR It is with great sadness that we announce the passing of Wayne Cameron Barr on Saturday, March 18, 2017 at the age of 75 years. A memorial service will take place at 6:00 p.m. on Friday, March 24, 2017 at Neil Bardal Funeral Centre, 3030 Notre Dame Avenue (across from Brookside Cemetery). Longer obituary to follow in Thursday's paper. NEIL BARDAL FUNERAL CENTRE 204-949-2200 neilbardalinc.com