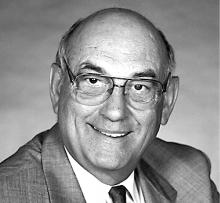 CLAUDE HOOPER WILSON October 11, 1931 - March 22, 2017 It is with deep sadness the family announces the passing of Claude Hooper Wilson on Wednesday, March 22, 2017 at St. Boniface Hospital Palliative Care. Claude is survived by his wife Carolyn; and children, Judy (Heidi Streu), Chuck (Samantha Jones), Sue (Kern Clayton) and Liz (Bruce Jasperson); his grandchildren, Landon and Jordyn Stewart; Cameron, Jenna, Sarah and Hannah Wilson; Brandon, Matthew and Kevin Clayton. Claude was predeceased by his parents George and Vicki Wilson, sister Peggy Stillinger, brother Dick Wilson and beloved granddaughter Andrea Wilson. Born and raised in Winnipeg, Claude was active in school sports and Kelvin High School musicals. He played on the Bison Men's Basketball team (1948-1952). He graduated from Commerce at the University of Manitoba and attended Harvard Business School. In 1966, Claude joined as third generation in the family business Wilson Furniture where he remained until 2003. Claude was a dedicated and proud Winnipegger, well respected in the community for his strong business acumen, integrity, and wholehearted dedication to all of his passions. He will always be known for his quick wit, honesty and honour, and his love for family, friends, good food and wine. Claude's lifelong passion for the outdoors, hunting and conservation led him to be a dedicated volunteer with Ducks Unlimited Canada for close to 40 years. His passion and professionalism led to Claude being President of the DUC Board in 1992 to 1993. Claude was extremely proud that his contributions and efforts were instrumental in the creation of the internationally-renowned Oak Hammock Marsh Interpretive Centre. He was a long-standing member of St. Charles Country Club, and immensely enjoyed his Monday Putter Group and the resulting lifelong friendships. A celebration of his life will be held Tuesday, March 28 at 2:00 p.m. at the Neil Bardal Funeral Centre, 3030 Notre Dame Avenue, across from Brookside Cemetery. The family would like to express their sincere gratitude to all the amazing staff at CancerCare Manitoba and the St. Boniface Hospital Palliative Care Unit for their care and compassion. We would not have made this journey without you. In lieu of flowers, donations in Claude's memory may be made to Ducks Unlimited Canada for the Oak Hammock Marsh Interpretive Centre or St. Boniface Hospital Foundation Palliative Care Fund. NEIL BARDAL FUNERAL CENTRE 204-949-2200 neilbardalinc.com
Publish Date: Mar 25, 2017