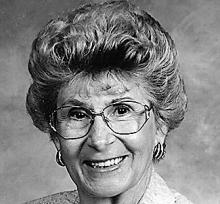 MARGERY ETTA PARKS (WOLOSHYN) Margery Etta Parks (Woloshyn) peacefully passed away on Saturday, March 18, 2017 at the age of 92. Born in Carruthers, SK, on January 11, 1925, Marge shared her adult life with husband Walter (aka "Dick") Woloshyn and her four children, Jim Woloshyn (Janis Salin) of Carpinteria, CA., Julie Leefe (Terry) of Oakbank, MB, John Woloshyn (Debra, nee Watt) of Winnipeg, Richard (aka "Sal") Woloshyn of Flin Flon, who still resides in the family home that Dad built in 1952. She is also survived by her eight precious grandchildren, ten great-grandchildren, many nieces and nephews and their families. Mom was predeceased by her husband Dick (1981), her parents Ethel and Harold Parks of Hudson Bay, SK, and by her only sibling, brother Robert Parks. Margery grew up in Saskatchewan where her Dad worked for CN Rail as a section foreman. Grandad had postings in Meota and Redvers, SK. Finally, they settled in Hudson Bay, SK. After high school Marge was offered secretarial training in Saskatoon through the armed forces during the Second World War. She was stationed in Dartmouth NS and occasionally mentioned the wonderful dances with the servicemen! She married Dad in 1946, whose family were Ukrainian immigrants who had also settled in Hudson Bay, SK to work on the railway. Mom and Dad moved to Flin Flon after marriage, Dad, working as a miner for Hudson Bay Mining and Smelting. Margery spent 26 years as a homemaker/mother extraordinaire before taking employment at CFAR Radio in Flin Flon in 1972 where she was the station's accounting and payroll person. For a time, she hosted a broadcast show "A La Femme", and was very proud of that period of time. It was great fun for her. Mom's hobbies were sewing, knitting, and crochet. Her sport was curling, but she and Dad loved to watch her boys play hockey too. She loved cooking, playing cards, and entertaining family and friends. Once she went to work outside the home, she joined the duplicate bridge club, spending many hours competing and travelling throughout the Americas to play in tournaments. She achieved her "masters" in the game (many Gold points). Ever the extrovert and fun-loving woman, after Mom retired, she spent nine winters in Green Valley, AZ, developing several close friendships and playing bridge. In 2007, at age 82, once she could no longer tolerate the travel to Arizona, she moved from Flin Flon to Winnipeg (Summerland Apartments) where she became closer geographically to John and Julie and four of her grandchildren and four great-grandchildren. Cremation has taken place. Friends of the family are invited to attend Mom's funeral which will be held at 1:00 p.m. on Friday, April 21 at Oakbank United Church, 582 Balsam Ave., Oakbank, MB. Flin Flon friends are invited to a drop-in luncheon reception in Flin Flon from 1:00 to 2:00 p.m. on Thursday, June 29 at Northminster Memorial United Church Hall. Interment of ashes in the family plot in Flin Flon will follow this reception. The family would like to thank the staff of Riverwood Square, Harmony Court, and Meadowood Manor, for the excellent care and support of Mom from 2009 to present. Mom was happy in these care environments and we always felt she was safe. Dadson Funeral Home in Flin Flon is in charge of arrangements. Condolence messages or stories of times with Marge may be posted to their website. If anyone wishes to make donations in memoriam, they may be made to Meadowood Manor Foundation, 577 St. Anne's Rd, Winnipeg R2M 5B2, or the Memorial Fund of the Northminster Memorial United Church in Flin Flon, 250 Bracken St., Flin Flon R8A 1P4, or The Canadian Cancer Society (Dad's interest), 193 Sherbrook St., Winnipeg R3C 2B7, or a charity of your choice. Marge was very charitable and she would appreciate your thought. Rest in peace, Mom, Grandma, Gigi, and God Bless.