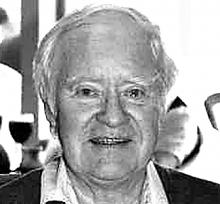 JAMES (JIM) CHILLES JAMIESON James (Jim) Chilles Jamieson, Dean Emeritus of Science at the University of Manitoba, passed away at the Charleswood Care Home on Monday, March 20 2017, at the age of 77. He leaves his loving wife Muriel and a host of friends in Canada and in Scotland. Jim was born in Aberdeen, Scotland, just before the outbreak of the Second World War, and had childhood memories of bombs being dropped by planes returning from the Clyde dockyards, but also of the moment when sugar rationing came off, and he began to indulge a taste for sweet things that never left him. He left school at 14, to work as a laboratory assistant at the University of Aberdeen. There, his intelligence was immediately recognized, and he was urged to get more education. He earned a Bachelor of Science degree at Heriot Watt University, then a Ph.D. in Biochemistry at Aberdeen with his supervisor Leonard Simkin. Following his degree, he was offered an instructor post in his department. Jim proposed to Muriel Shaw in the laboratory, as the two of them were washing test tubes, and they were married in August 1967. At once they left Aberdeen for Canada, on what they believed would be a leisurely trip around the world. Pausing in Montreal to see Expo 67, they arrived in Winnipeg, where Jim took up a post-doctoral appointment with Howard Lees, in the Microbiology Department at the University of Manitoba, while Muriel immediately found work teaching English at Kelvin High School. They never left Winnipeg. The Chemistry Department at Manitoba was looking to modernize its biochemistry offerings, and in 1968 it hired Jim as an Assistant Professor. At first the only biochemist in a traditional chemistry department, Jim, along with colleagues in Microbiology, created a set of up-to-date biochemistry courses, which soon developed into a full-fledged Honours Biochemistry program. His teaching style was enthusiastic and often exciting, and his own delight in his subject attracted many students. He established a life-long, federally funded research program, investigating the role of glycoproteins in an important metabolic phenomenon, the acute phase response. Many publications resulted from his research, and he inspired and trained many students as undergraduates, Masters and Ph.D. graduates, and as research associates. These people were devoted to him, and many remained his good friends. Soon after Jim's appointment in Chemistry, Doctors Bruce Chown and Jack Bowman recruited him as a consultant to help design the first Plasma Fractionation Laboratory. This produced an improved form of gamma globulin, from the blood of Rh-negative donors, for Dr. Chown's famous method to protect Rh-positive babies born to Rh-negative mothers. The product, WinRho, was the origin of the Winnipeg biotechnology company, Cangene. Jim proudly served for the rest of his life on the board of the Rh Foundation, whose funds come from the WinRho program, and are used to support University research. Although teaching and research were his favourites, Jim took on more than his share of administrative duties at the University of Manitoba. Early in his career, he served on a committee to negotiate the creation of Joint Masters Programs with the University of Winnipeg. He was elected to many terms on the University Senate, where he served as speaker for the Executive, and was an informed and effective debater during a period when the university was responding to a rapidly changing academic world. Jim was Head of the Chemistry Department from 1986 to 1994, and then served 10 years as Dean of Science. As Dean, he had severe financial pressures to deal with, but was consistent and determined, encouraged the hiring of high-quality new staff, and left the Faculty strong and confident in its future. One highlight of his term was the celebration of the centenary of the Faculty of Science, in 2004. Jim was a formidable photographer, spending many hours perfecting this art. At school, he was a keen golfer, and a field hockey player who had missing teeth to prove it. In Winnipeg, he continued golfing, and was a demon table tennis player, serving on the executive of the provincial association. Later, he took up tennis, which brought him a new circle of friends. Over the 49 years of marriage, Jim and Muriel were determined to see the world, and experience all the destinations that would enrich their lives, from Europe to Australia and New Zealand, from the Caribbean to Japan. As a climax, they made a memorable trip to Africa, a visit that had always been Jim's dream. Jim had a zest for life, enjoying it to the fullest with the people who mattered most. He was taken from us much too soon. He remains in a warm place in all our hearts. Muriel thanks the staff of the Charleswood Care Home for their skill and kindness, in making Jim's life there as happy and comfortable as possible. A celebration of Jim's life, at which all will be welcome, will be organized at a future date. In lieu of flowers, should friends so desire, a gift in Jim's memory may be made to Parkinson Canada in Manitoba, or to a charity of your choice. THOMSON FUNERAL HOME 669 BROADWAY, WINNIPEG, MB R3C 0X4 204-783-7211 Condolences may be sent to www.thomsonfuneralchapel.com