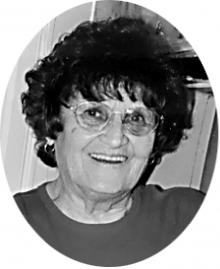 JEAN DYKUN After a lengthy illness, on Sunday, April 2, 2017, Jean Dykun passed away at the Vita and District Health Centre, Vita, MB, at the age of 85 years old. Jean was predeceased by her parents, Maria and William Perchaliuk; three sisters, Kay, Linda and Olga; and one granddaughter Nicole. She is survived by her husband Nick; three children, Ritchie (Shelley), Jarvis (Lorraine), Sandra (Wayne), 10 grandchildren, six great-grandchildren. Prayers will be said on Thursday, April 6, 2017 at 7:00 p.m. at the Vita Hall, Vita, MB. Funeral service will be held on Friday, April 7, 2017 at 10:30 a.m., also at the Vita Hall, Vita, MB, with interment at the Gardenton Cemetery, Gardenton, MB. Arrangements by Vita Funeral Home Vita, Manitoba (204) 425 3114