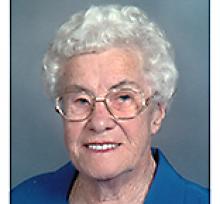 LEONA ADRINA SPANGELO (nee CASEY) 1918 - 2017 It is with sadness that the family of Leona Adrina Spangelo (nee Casey) announce her passing on April 4, 2017, at the Charleswood Care Centre in Winnipeg, one day after reaching her 99th birthday. Leona was born April 3, 1918 to parents, Edna and Wilfred Casey of Morden. She will be lovingly remembered by her two sisters, Marguerite Kerr and Doreen Johnson; daughters, Jo Ann and Mary Lou, and son, Don (Pat). She leaves behind five grandchildren: Joel McIntosh (Jenn); Janine McIntosh (Ian Fenton); Sara, Lisa, and Whitney Spangelo. She will be missed by six great-grandchildren: Nicholas, Katia and Evan McIntosh; Avery, Erin and Rachael Fenton; nieces and nephews. Leona was predeceased by her husband, Vernon, brother, Wilf Jr., grandson, Jefferey McIntosh, and son-in-law, Jim McIntosh. Leona grew up on the family farm in the 1-6 area. She graduated from nursing at the Victoria General Hospital in 1941. She married Vernon in 1945 and lived in Pearce district until they moved to Morden in 1960. She is remembered for her strong work ethic and self determination. She worked on the Casey family farm as a young girl and throughout her nursing training. After marrying and while raising three children on the farm, she gardened, canned, sewed for the Red Cross, baked and made many trips to deliver lunches to the field. We have lots of fun memories having lunch with Dad in the field. After moving to Morden, she worked at the Morden, Winkler and Altona hospitals and looked after her elderly parents in their later years. She was a member of the Rebeccas and the United Church Ladies Auxiliary, and was an active volunteer with the Multiple Sclerosis Society, the Canadian Cancer Society, and the Manitoba Alzheimer Society. Family gatherings were important to her and often there were cousins, aunts and uncles around the dinner table. She will always be remembered for her African violets and roses; sewing clothes for her young children; and knitting projects. We very much appreciate the care provided and compassion shown by staff in Unit 6 at the Charleswood Care Centre, and the many who made her life happy at Lindenwood Manor. In accordance with Leona's wishes, cremation has taken place and a memorial service will be held at 2:00 p.m. on Saturday, April 8, 2017 at Wiebe Funeral Chapel, 1050 Thornhill St. in Morden. Should friends so desire, memorial donations may be made in Leona's memory to the charity of their choice; the Canadian Blind Institute, or Alzheimer Society. Wiebe Funeral Chapel, Morden In care of arrangements wiebefuneralhomes.com