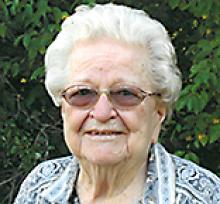 HELEN SKOGAN October 17, 1921 - January 13, 2017 I am very lucky to come from a family of storytellers. I guess, more accurately, it is a family of memory-tellers. Every family dinner that I can remember would end up with everyone around the table reminiscing about people they used to know; places they used to visit; old stories that would still make everyone laugh. In writing my Grandma's obituary, I sat down and thought about all of the stories and all of the memories. Here's one that stands out for me. Years ago, when my Grandpa was sick, I went home to spend time with him and Gram. We talked a lot about "the old days". Which prompted my Grandpa to put his arm around Gram and say: "We had fun. We had a (colourful language) good time". He said this knowing that his cancer was not going to go into remission this time; knowing that their days together were limited. I left there in tears. Sad ones, mixed with happy. Because I had the privilege of witnessing people who were still deeply in love after 58 years of marriage, and still having fun together. And it's a memory I bring up here because it encapsulates my Grandma. She loved having fun more than anyone I know. Gram was feisty before it was considered a compliment. Family lore has it that she and my Grandpa started courting when he yanked on her pigtails, and she punched him. A little bit "Anne of Green Gables" and a little bit "Fight Club" and completely and totally in character for both of them. Grandpa never stopped teasing her. She never stopped rising to the occasion. I miss hearing the two of them in action; one would get the other riled up about something, and they'd end up laughing so hard that they had to sit down. They were each other's best friend and favourite pastime. Gram also had a great love for her family. Nothing made her happier than having all of her kids and grandkids around. Except maybe a game of cards. Which is why you'd find the Skogans and Willises around the table after every holiday dinner playing a cutthroat game of 31. It was very hard for my Grandma to see the number of card players drop when Grandpa -her Herb (also known as "Herbert", depending on her level of annoyance)- passed away; when her beloved son Billy died; when her daughter-in-law Sandra died; and when she lost her brother Fraser and sister Marion. Hard, too, to have had to say goodbye to family members and to life-long friends. Here's my Grandma in a nutshell. She loved her family and friends, fiercely. She loved a good laugh; a good argument; a good pork roast. She could bake better than anyone I know. She cheated at cards. Dementia stole her debating and baking skills; her appetite these last few years didn't allow for too many roasts. But she still enjoyed good laughs, right up until the week of her passing. And the statistically improbable number of times that she "won" at cribbage tells me that her cheating ways remained intact, too. Thank you to everyone at Red River Place: at Goodwin Lodge; and at Hunter Memorial Hospital for taking such good care of someone we loved so much. Thank you for the kindness, the compassion, and for sneaking her the odd tomato sandwich. I'll miss my Grandma. So will Lana (Kelly), Eric (Tina), Karla, and Kyle (Anita). Jayden, Vayha, Noah, Kelvyn, and Kevin were lucky enough to know their Great-Grandma and to have a special relationship with her. Bert Skogan (Shirley) and Karen Willis (Lyle) will miss their Mother terribly, too. As will her many friends and the rest of her family members, including her sister, Annabell (John Bueckert) and cousins, nieces, and nephews. Goodbye, Grandma. We had a (colourful language) good time. Following a private graveside service, friends and family are invited to celebrate Gram's life at the Teulon Rockwood Centennial Centre on Monday, April 17 at 2:00 p.m. Flowers gratefully declined. Memorial donations to Goodwin Lodge (at Box 89, Teulon, MB., R0C 3B0) would be appreciated. Please make cheques payable to T H M H D - Fdn. KEN LOEHMER FUNERAL SERVICES IN CARE OF ARRANGEMENTS 204-886-0404