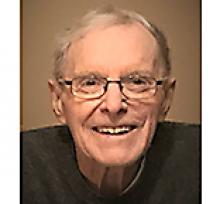 GEORGE E. MCCARTNEY With heavy hearts, we announce the passing of George McCartney, our beloved husband, father, and grandfather. He left us peacefully on March 30, 2017 at the age of 80. George will be lovingly remembered by his wife Patricia, of 56 years; children Doug (Sharon), Heather, Blair (Jacquie); grandsons Mark (Katie), Scott, Brandon, and Kieran. Also survived by brother Ken (Virginia), sister-in-law Jennifer, many nieces, nephews, and family members. He was predeceased by his parents George and Dorothy, and a brother Geoff. George was employed by the Province of Manitoba's Highways Department for 37 years. The experiences of those years helped define the importance of hard work, good judgment, courage and integrity in one's life. Beginning at age 15, and throughout his life, he was an accomplished sportsman who competed in many national and international competitions, at which he excelled. He strongly believed in the importance of giving back to the community and gladly volunteered for leadership positions in the sports that he enjoyed. George was a co-founder of the junior curling program at Assiniboine Memorial Curling Club and always took great pride in the accomplishments of its junior teams. He spent many memorable years at his special place, Malachi Lake, Ontario, where he developed many friendships, always lending a hand to anyone and everyone. He especially enjoyed fishing and blueberry picking with his grandsons. George and Pat also had a love for Mexico and spent numerous winters in Cancun along with some old and a lot of new friends. He took utmost pride in being a grandpa to his grandsons, taking a special interest in all of their activities, and was their greatest supporter. Throughout his lengthy illness, George attended every grandson's hockey game he could, regardless of location. George was a man with a big heart, a warm smile, and a generous spirit. He was everything to his family and his family was everything to him. He sincerely appreciated the care he received from CancerCare Manitoba - St. Boniface Unit, as he always felt that he was treated with kindness and respect, just like family. In keeping with George's wishes, cremation and a private family memorial service of interment has taken place. Donations in George's memory can be made to the Vic Peter's Little VIPs Fund through the Winnipeg Foundation, 1350 One Lombard Place, Winnipeg, MB, R3B 0X3. "We will always remember the love you had for us. There will never be another one to replace the love in our hearts that we have for you." NEIL BARDALFUNERAL CENTRE 204-949-2200 neilbardalinc.com