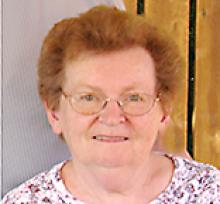 TERRY WOODLEY Peacefully, on April 4, 2017 at Country Meadows PCH, in Neepawa, MB, Terry Woodley passed away at the age of 70 years. She was predeceased by her mother Merle Woodley; her father Sidney Kenneth Woodley; as well as family friend Darlene McClay. She is survived by her sister Barbara (Ivan) Foster; niece Kelly (Melvin) Meisner; nephews, Albert (Annette) O'Dea, Sean O'Dea, James (Cherie) Foster, and niece Candy (Bill) Croy, as well as many great and great great-nieces and nephews. Much of Terry's life was spent in Neepawa where she spent her time in Touchwood's day program and later at the senior day program at Yellowhead Manor. Terry thoroughly enjoyed sewing, crafts, baking, puzzles, reading magazines and spending days shopping. She loved to go for coffee, and just be around other people. Terry was all about family and was lucky to have both her own family as well as the family she found at Touchwood Park. The family would like to extend their thanks to the staff of Touchwood Park, McCreary/Alonsa Health Centre and Country Meadows. As per Terry's wishes, there will be no funeral and a private family interment will be held at Minitonas Cemetery at a later date. In lieu of flowers, donations can be made to Touchwood Park Association in Neepawa. White's Funeral Home, Neepawa, MB in care of arrangements. 1-204-476-2848.