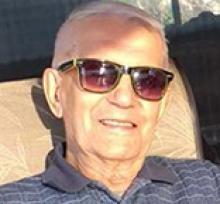 DONALD ALEXANDER NEDOHIN May 30, 1925 - Overstoneville, MB April 16, 2017 - Selkirk, MB Dad passed away in his sleep in the early of hours of Easter Sunday, at the age of 91, after an eight month battle with old age. He was predeceased by his first love Hazel (Collins), and his second wife Geraldine (Will/Hutt). Donald was born in Overstoneville the youngest of John and Mary's bakers' dozen. Polly Anne, Stephen, Juilanne, William, Fanny, Anne, Aneta, Lena, Milton, Bert, Kathleen, and Elizabeth, all predeceased Dad. Dad is survived by his sons Dale (Wendy) and Douglas (Jill), and his grandchildren Dustin and Jacqueline. Dad dropped out of school to help his mother on the farm while his brothers served in the Second World War. Dad earned the title, Jack of All Trades, Master of None. Dad was a farmer in Overstoneville, an entrepreneur in Winnipeg - owner /partner of full service garages, an owner operator of his dump truck, and later becoming a custodian at the University of Manitoba. While at the University of Manitoba, he developed an interest in carpentry learning the trade from his uncle Garret Kautz. Dad would build fences, sheds and garages and develop basements, finally building his own home in Petersfield. In retirement Dad would spend many hours in his work shed, building wishing wells and other yard ornaments for family and friends. Donald and Hazel travelled south to Mesa for a few winters to escape the cold. This is where, at age 70, Dad started golfing. He was lucky enough to get two hole in ones before giving up golf at the age of 87. Even after collapsing on the curling rink, requiring a pace maker, and suffering TIA's, he still managed to floor curl and bowl, and competed in Senior Tournaments around the province and in British Columbia. People were very important to Dad, he was always willing to lend a hand to help family or a friend. Thanks to all the family and friends who returned the favours by helping move Dad in the past couple of years, and visiting him at Woodlands. The family would like to thank the staff at Woodlands, and Selkirk General Hospital. A memorial service will be held at Clandeboye United Church, Thursday, April 20 at 1:00 p.m. A private interment will take place in Overstoneville. In lieu of flowers, if friends so desire, the family requests donations be made to the Canadian Cancer Society or the Heart and Stroke Foundation. Online condolences may be left at www.gilbartfuneralhome.com Gilbart Funeral Home, Selkirk in care of arrangements.
Publish Date: Apr 19, 2017