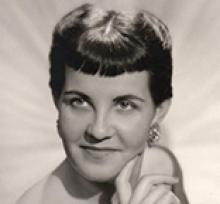 AGNES (AKSANA) GALAYDA Agnes (Aksana) Galayda (nee Wiwchar), born November 1, 1928, daughter of Theodore and Nastasia Wiwchar, wife of John Galayda for 53 years, mother of Robert Allan (Linda Regier) and Theodore Andrew Galayda, grandmother of John Bradley, step-grandmother of Schylar Morgan Epp, passed away peacefully on the morning of April 14, 2017, at Holy Family Nursing Home in Winnipeg, Manitoba. Aggie, as her friends and neighbours knew her, moved away from the farm in Roseau River, MB and came to Winnipeg when she was just 13 years old. An unstoppable force, she carved out a good life for herself, working as a live-in maid, educating herself, and then going to work in Winnipeg's garment industry. My mother rose to the rank of head forelady at Tan Jay, head forelady at Richlu Sportswear for many years, and the chief fabric designer at Grays PVC Pipe Furniture. Her home life was just as busy, working at her own business of Aggie's Needle and Thread, doing clothing alterations, repairs, dress design and making Smartie Pants Diapers for infants. Most of all she was a mother and supporter of her two boys and husband. The mainstay of her life was spent as caregiver and advocate to my handicapped brother Theodore. Aggie could best be described as fierce in the face of any bureaucrat that would hinder services to Ted or any other handicapped person. She had an iron will and was feared by those who opposed her and lauded by those she championed. Mom wasn't all business, she loved to cook for us and others. Her perogies were famous within the community, with constant requests to sell them by the bagful, or by the roaster full. Mom loved needlepoint, sitting outside when the weather was right, taking trips in the motorhome all over North America, shopping in Grand Forks, playing in her garden and visiting friends and relatives. After my brother's and father's passing in 2011, Mom finally, officially retired at the age of 83, where she enjoyed her days at home. She moved to Holy Family Care Home in December of 2016 and remained there until her passing. A stern taskmaster, a gentle soul, a tough teacher, a beloved friend, she will be missed by all that knew her. A tireless worker, she can finally rest in the arms of the angels, free from the shackles of this life, where her parents, husband and son have been waiting for her. I would like to thank the staff of 3A in Holy Family Care Home on Aberdeen Avenue here in Winnipeg, for their exemplary care and compassion during my mother's final days. In lieu of flowers, a donation should be made to Holy Family Care Home, so their exemplary work can continue. Funeral to be held at Klassen Funeral Home, 1897 Henderson Highway, Winnipeg on Wednesday, April 26, 2017 at 6:00 p.m.