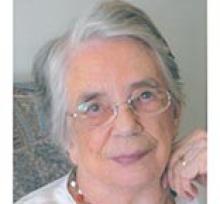 VINA HENDERSON (nee MCLEOD) 1918 - 2017 Vina Henderson passed away on Friday, April 21, 2017. She is survived by her sons, Donald (Cheryl) of Calgary and Norman of Winnipeg. She was predeceased by her husband, Wilbert in 2007, her sister, Eileen in 2012, her brothers Neil in 2001, Alistair in 1944 (R.C.A.F. KIA) and Norman in 1943 (R.C.A.F. KIA). Vina was the daughter of the late William and Elizabeth McLeod of Balmoral. She attended Winnipeg Normal School and after graduating she taught in Woodlands, Treherne, Mystery Lake School District, Selkirk and Winnipeg. In 1952, she married Wilbert Henderson and together they farmed north of Morden. Mum loved gardening, nature, long walks and visiting neighbours. Cremation has taken place. Memorial service will be held at 2:30 p.m. on Tuesday (today) at Wiebe Funeral Chapel, 1050 Thornhill St. in Morden with private family ash interment at Hillside Cemetery prior. The family would like to thank the staff at Tabor Home for all the kindness they showed mum and the home care staff whose efforts helped mum stay in her apartment before she moved to Tabor. In lieu of flowers, donations may be made in Vina's memory to the Tabor Home Building Fund, or to the charity of your choice. Wiebe Funeral Chapel, Morden In care of arrangements wiebefuneralhomes.com