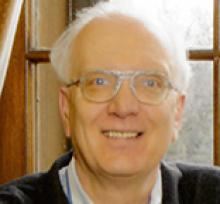 NORMAN GARROD LARSEN Norman Garrod Larsen was born in Moose Jaw on April 4, 1935 and died in Winnipeg on April 26, 2017. He was the youngest of three children born to Ida Riise Larsen and Sigurd Alvin Larsen, an immigrant from Norway who made a good living through the Depression as a musician. Ida often said that times were tough, but everyone had a nickel for the Saturday night dance. Norm came to Winnipeg at the age of 10 and attended Hugh John Macdonald Jr. High School and Daniel McIntyre High School, while living with his mother and stepfather upstairs in a rooming house at 749 Winnipeg Avenue (1945 to 1952). He received a B.A. from United College (1956), taught history at St. James Collegiate (1962 to 1966) and received a law degree from the University of Manitoba (1968). He articled with Joe Zuken and practiced law with Zuken and Roland Penner (1968 to 1972). The firm became Zuken, Penner & Larsen from the day he was called to the Bar and his earnings as an articling student dropped by half. In 1972, he was the first staff lawyer hired by the newly established Legal Aid Manitoba, starting as the Senior Attorney at the first of six Neighbourhood Law Centres at 95 Isabel Street, and held several other positions, ending as Executive Director (1977 to 1979). He attended Harvard Law School and received a Master of Laws (1980). After brief positions in the Law Society of Manitoba and the Faculty of Law, he spent his last 13 years in practice (1987 to 2000), as a legislative drafter with the Office of Legislative Counsel in the Department of Justice (Manitoba). In retirement, he conducted seminars on Funeral Planning (2000 to 2005), and published three books on the province's legal history (one with Roland Penner). Norm Larsen was partner to Linda; father to Kenton and Janna; brother to Sid Larsen and Peggy Camilleri; uncle, and friend to all. If you wish to make a donation in memory of Norm Larsen, please consider Winnipeg Foundation, CancerCare Manitoba Foundation, or Riverview Health Centre Foundation. A celebration of Norm's life will take place at Neil Bardal Funeral Centre, 3030 Notre Dame Avenue, on Friday, May 5 at 2:00 p.m. NEIL BARDAL FUNERAL CENTRE 204-949-2200 neilbardalinc.com