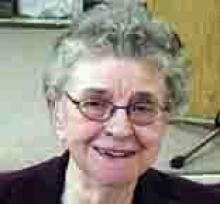 TINA GROENING (nee HEINRICHS) 1918 - 2017 Tina Groening was born on January 25, 1918 to Peter and Helena Heinrichs, in the R.M. of Rhineland. She married Frank Groening on August 13, 1944. They farmed south of Lowe Farm for 30 years. Here they raised five daughters and one son. In 1973, Mom and Dad had a major car accident which led to their retirement and a move to Winkler in 1974. When their house and yard became too difficult to maintain, they moved into Lion's Court in 1990. Dad died in 1995 and Mom continued to live in Lion's Court for another 20 years. She was hospitalized in March of 2015 and moved into Tabor Home in Morden, in June of that year. On May 5, 2017, at the age of 99, she peacefully moved to her heavenly home, with all her children at her bedside. We remember some of her Godly characteristics: Her unconditional love for her family and for her God, her self-sacrifice for others and her thankfulness. She had an unwavering trust in God and easily broke into praise for the things He had done for her. She is lovingly remembered by her five daughters: June and Peter Voth, Phyllis and Roland Loeppky, Gladys and Clarence Hiebert, Sandi and Larry Eidse, Elva Groening and one son, Lloyd and Marge Groening; 17 grandchildren and their spouses and 30 great-grandchildren. She is also survived by six sisters: Susan, Nettie, Agatha, Jessie, Elma, Lil; and one brother Irvin. She was predeceased by her husband Frank; one son-in-law Mel Groening; one great-grandson River Eidse, five sisters and numerous in-laws. Funeral service will be held at 11:00 a.m. on Wednesday, May 10, 2017 at the EMMC Church, 600 Southview Dr. in Winkler with interment to follow at Rosefarm Cemetery. We wish to thank the kind and caring staff at Tabor Home, the chaplain, Morris Vincent, Mom's pastor, James Peters, Mom's sisters, our spouses and children, and our many friends, who all supported us in the last weeks. Thank you to Wiebe Funeral Home for their kind service. We sorrow deeply and will greatly miss our Mom, especially her love and prayers. But we rejoice that her prayers to be with Jesus have been answered. We look forward to the day when we will be together again. The Groening family Wiebe Funeral Home, Winkler In care of arrangements wiebefuneralhomes.com