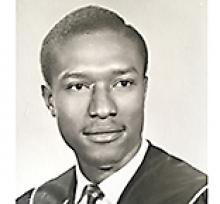 DR. LAWRENCE F. DOUGLAS On April 14, 2017, Dr. Lawrence Fitzroy Douglas died at his home in Winnipeg. Born January 17, 1927 in Mount St. George, Tobago, Lawrence was the eldest of four children born to Eldred and Malvina Lawrence Douglas. A member of the "little Carib" dance troupe, Lawrence performed in the Caribbean Festival of Arts in Puerto Rico in 1952 and in Jamaica's tercentenary celebration in 1955, he continued dancing until 1960. Following his younger brother, Eustace, to Vancouver, Lawrence studied sociology earning a B.A. and M.A. from UBC. Upon completion of his Masters in 1962 he taught at Western Washington State College in Bellingham. Lawrence then left for the United Kingdom where he welcomed the birth of his daughter Delia and obtained a Doctorate in Sociology at the London School of Economics in 1964. Lawrence returned to WWSC before moving to Winnipeg as a single father in 1967, joining the Department of Sociology, at the University of Manitoba, where he taught until his retirement in 1989. Lawrence loved his tennis, music, gardening, photography, cooking, single malt scotch and a good aged rum. His family and friends will miss his keen intellect and hearty laughter. Lawrence is survived by his younger sister Monica; his daughter Delia; and his beloved pets, Masulu and Bandit. In accordance with his wishes a cremation has taken place. A memorial will be held on Sunday, June 25 at 2:00 p.m. at St. John's College, 92 Dysart Rd., Winnipeg, MB.