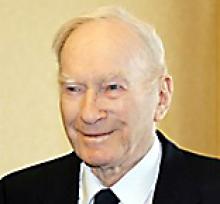 LLOYD WILLIAM BROWN February 28, 1913 - May 8, 2017 Lloyd Brown passed away peacefully at Riverview Health Centre. He is survived by his wife of 74 years, Alice; his sons, Richard (Judy) and Bill. Left to mourn his loss are his grandchildren, Sarah (Keith), Craig (Laura), Glen (Laura), Justin and Andrew, as well as his great-grandchildren, Colleen and Kyle McConnell and Cailan and Camille Brown. Lloyd was born on a large farm just outside of Winnipeg's West perimeter. He had many happy memories of his time on the farm, helping his parents, Peter and Emma, playing with his four siblings and skating on Sturgeon Creek. One of the greatest highlights in Lloyd's life was during the Second World War when he was a Flight Lieutenant, training hundreds of airmen. His postings included many areas of Canada and England. Following the war, Lloyd worked as a furniture salesman for Eaton's for 40 years. After retiring from Eaton's, Fred and Cynthia Brick asked him to work with them at Brick's Fine Furniture. Lloyd was a loving family man who enjoyed being with his children, grandchildren and great-grandchildren. Sports played a prominent role in his life. He curled and golfed until his late eighties. Both Lloyd and Alice loved to garden and go for walks. The family would like to thank the wonderful, caring staff at the Sturgeon Creek Retirement Residence 1 where Lloyd resided for the last eight years of his life. The care Lloyd received on the palliative care unit at Riverview Health Centre for the last two weeks of his life was exceptional and very much appreciated. A reception for family and friends will be held at Chapel Lawn Memorial Gardens & Funeral Home, 4000 Portage Avenue, on May 18, 2017 from 11:00 a.m. to 12:30 p.m. Flowers gratefully declined.