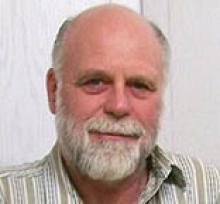 DENNIS GRANT SHEARDOWN Dennis Grant Sheardown, of Hamiota, MB, and formally of Winnipeg; was born in Hamiota on May 8, 1948 and passed away at Birch Lodge in Hamiota on April 17, 2017 at the age of 68. A funeral service was held on April 22, 2017 at the Hamiota United Church and interment followed at the Hamiota Cemetery. Dennis was born to Lorne and Gertrude (Brydon) Sheardown. Dennis had two sisters, Kathy (Sheardown) Slimmon of Shoal Lake, MB and Meredith Fawcett of Salt Spring Island, BC. Dennis took all of his schooling in Hamiota. After graduating high school, he left Hamiota and went to Thompson, MB and worked underground in the mine there for one and a half years. This kind of work was not really what he wanted to do. He then applied for the RCMP but was not accepted due to what we found out was some sort of hearing problem. He then got a chance to apply for the Winnipeg City Police and was accepted and spent the next 29 and one half years on the force. He retired in 2000 with the rank of Staff Sargent. While in Winnipeg, he bought a house in St. Norbert which he spent many hours and days remodeling. Dennis and his dad also built a cabin at Davidson Lake in Nopiming Provincial Park where he enjoyed going on his days off. Dennis also enjoyed hunting and fishing and would often come out to hunt deer around Hamiota with some of his police force friends from Winnipeg. He would also go frequently up to the annual police fishing derby by The Pas. Dennis also loved a good meal and would regularly take in many fall suppers, family gatherings and anywhere there was an abundance of food. Once his disease progressive supranuclear palsy worsened, he sold his house and cabin and moved out to Shoal Lake and then into Birch Lodge in Hamiota. Dennis was predeceased by his dad in 2005; his mother in 2010; and his sister Kathy in 2016. He was also predeceased by many uncles, aunts and cousins. Dennis is survived by his brother-in-law Dearle Slimmon; his sister Meredith Fawcett; and by his nieces and nephews. Dennis is also survived by his aunts, Norma Sheardown, Marion Sheardown, Doreen Alexander and his uncle Glen Sheardown. Dennis will also be missed by many cousins and friends, especially the friends in the Winnipeg Police Force and by his sidekick at Hamiota Roderick (Sod) McPhaden and really good friend Florence Young. May Dennis rest in peace now alongside his dad and sister Kathy. The family of Dennis Grant Sheardown would like to thank the following people for all their concern and help, Dwayne Campbell of Campbell Funeral Home, Hamiota for being so kind, helpful and considerate, Rev. Doug Martindale of the Hamiota United Church for doing the service, the choir of the United Church, Linda Clark for the solo she sang and also to Agnes Bridge for playing the piano. Also a big thank you to the UCW ladies for providing the lunch after the service. A special thank you to Dennis's niece Wanda Brooks for doing the eulogy at the church and also to all the former members of the Winnipeg Police Force who came to the service. A special thanks to Ron Dawson who came in police uniform and said some lovely information about Dennis at the luncheon. Thank you to all that came to the service, sent cards and condolences. I, Dearle Slimmon, would like to thank the pallbearers, Jim Allen, Jim McGhee, Ken McMillan, Murray Fortune, Roderick McPhaden and Brian McKee for their services. I also want to express a huge thank you to Norma Sheardown and Florence Young for all their help and consideration at this time. I also want to thank all the staff of Birch Lodge in Hamiota for all they have done over the last few years. Thank You. From the Slimmon, Sheardown, Fawcett, and Brydon Families. Campbell Funeral Home Hamiota, MB 204-764-2744 or Toll Free: (866) 620-2744