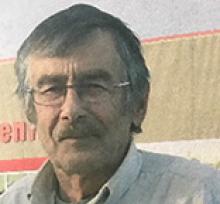 PAUL RUSSELL MONASTYRSKI 1945 - 2017 On May 12, 2017, Paul left this world on his journey to be with his father, whom he has dearly missed since 2009. He is survived by his wife of 48 years, Julie, his daughters, Karen (Barry) and Lori, eight grandchildren, several nephews and nieces. He is also survived by his mother, Mary, and brother, Jerry (Annette). He will be missed by his sister-in-law, Joanne and brother-in-law, Stan. He was predeceased by his brother-in-law, Allan. Forever in our hearts. Paul's funeral service will be held at Vita Funeral Home on May 17, 2017 at 10:30 a.m. with interment at Zhoda Community Cemetery, Zhoda, Manitoba. Vita Funeral Home In Care of Arrangements (204) 425 3114