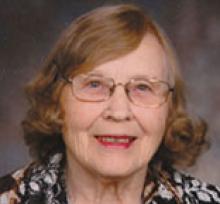 CATHERINE RYZ (nee MARCYNUK) It is with great sadness that we announce the peaceful passing of our mother, Catherine Ryz on May 13, 2017, at the age of 96, at Country Meadows Personal Care Home in Neepawa, Manitoba. Left to cherish her memory are her sons Ernie (Barbara) Ryz, Surrey, BC, and Marvin (Mary) Ryz, Pinawa, MB; her seven grandchildren, Juanita (Jeff) Van Norman, Lisa (Brad) Kupiak, Bradley (Michelle) Ryz, Laurie Ryz (Pauvlo Matheos), Krista (Graeme) MacDonald, Bryan Ryz, and Sue-Ellen (Barry) Watson. She is also survived by 10 great-grandchildren, Payton, Tristen, Lucas, George, Devin, Halle, Katherine, Winston, Ava and Chloe. Also left to mourn her loss is her sister Martha (Stanley) Blahitka, Neepawa, MB, her brother Ernie Marcynuk, Regina, SK, sisters-in-law Sylvia Marcynuk, Olga Marcynuk and Margaret Ryz, Dauphin, MB, and many nieces, nephews and their families. Catherine was predeceased by her husband Stanley in November 1987, after 48 years of marriage, her parents Samuel and Mary Marcynuk, brothers Nick Marcynuk and his wife Molly, John Marcynuk, Mike Marcynuk and his wife Iris, and Wilfred Marcynuk. Mother was born in Dauphin, MB on April 26, 1921. She was raised on a farm east of Dauphin near Sifton, MB, along with her six siblings. From Mom's account, her early years at home (after school) consisted of tending to the garden, farm chores and helping to look after her siblings (Mom being the second oldest of seven children). On October 29, 1939 she married Stanley Ryz and they took up farming together two miles north of Dauphin, where they began raising their sons. Mom enjoyed farm life - especially gardening and tending to the farm animals. In 1952 the family moved to Firdale, MB to start a new life on a larger farm. There Mom continued her love of gardening and made many new friendships while joining the Edrans Ladies' Aid group. Mom was an excellent seamstress and also an exceptional cook. She also loved to crochet and made several handmade quilts, giving heirloom quilts to her grandchildren, which they all treasure. Soon after her husband Stanley passed away, she bought a little house in Neepawa and settled down to many happy years there, where she was closer to her church and some of her family and friends. She was an active member of St. Dominic's Roman Catholic Church and Catholic Women's League. In 1995, Mom had the opportunity to travel on a group pilgrimage tour of the Holy Land, Rome and Egypt, which was a highlight of her senior years. In 2009, when Mom could no longer keep up with the responsibilities of owning her own home, she moved to an apartment in Kinsmen Kourt, where she was closer to many of her friends. The ills of dementia slowly began to overtake her and she made her final move to Country Meadows in March 2013. There, she received the quality care she required until her end. Many thanks to the caregivers and staff at Country Meadows for the excellent and compassionate care Mom received. Thanks as well for the prior care Mom received from Dr. Ong and Dr. White, and many personal care workers in Neepawa. Mass of Christian Burial will be held on Friday, May 19 at 11:00 a.m., St. Dominic's Roman Catholic Church, 416 1st Ave., Neepawa, MB. A private family viewing will be held at 10:00 a.m. at St. Dominic's. In lieu of flowers, donations may be made to the Alzheimer Society of Manitoba. White's Funeral Home Neepawa, MB in care of arrangements, 204-476-2848. REST IN PEACE MOTHER