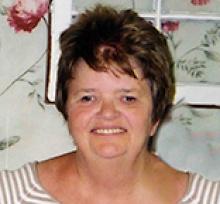 FRANCES SIGRID HUNT (nee GILLIS) 1943 - 2017 On Tuesday, May 16, 2017, at Boundary Trails Health Centre, Sigrid Hunt, aged 74 years, of Morden, MB, formerly of Darlingford, passed away. She leaves to mourn her passing two sons, Rodney (Christine) and Ryan (Dana), five grandchildren, Brock, Bryce, Matthew, Jenaya, and Bernadette, three great-grandchildren, Zander, Marshall and Draven, as well as one sister, one brother and their families. She was predeceased by her husband, Glen Hunt in 2015. Cremation has taken place. Memorial service will be held at 2:00 p.m. on Tuesday, May 23, 2017, at Wiebe Funeral Chapel, 1050 Thornhill St. in Morden, with a private family ash interment at the Icelandic 1-6 Cemetery. Donations may be made in Sigrid's memory to the Icelandic Cemetery Fund. Wiebe Funeral Chapel, Morden In care of arrangements wiebefuneralhomes.com