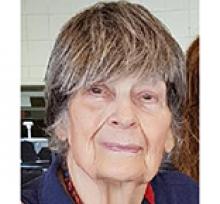 MYRTLE JUNE LISKE Myrtle June Liske of Winnipeg, formerly of Inglis, MB, passed away on Monday, May 15, 2017 at the age of 87 years. Myrtle is survived by her daughter Charlotte Jorek of Winnipeg, grandchildren: Rick (Angela Fuchs) Jorek of Winnipeg, Michelle (Dale) Leney of Calgary, great-grandchildren: Madelynn Jorek, Julia Gordon and their mother Reanne Jorek; Devin Jorek, Riley Jorek and their mother Perri Jorek. Myrtle is also survived by sisters: Shirley (Ken) Billson of Winnipeg, Vi Truthwaite of Fisher Branch, Lily Cassidy of Ochre River, and Hazel (Ian) McCowan of Steinbach. The funeral service will be held on Saturday, May 27, 2017 at 1:00 p.m. from the Braendle-Bruce Funeral Chapel, Russell, MB, with interment following in the Freefield South Cemetery, Inglis. If friends so desire, donations may be made to the Seventh Day Adventist Church, World Vision or the Canadian Red Cross. Remembrances and condolences may be emailed to braendlebruce@mts.net Braendle-Bruce Funeral Service of Russell in care of arrangements. (204) 773-2747