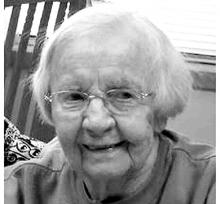 RUTH DYCK 1922 - 2017 Ruth Dyck peacefully went home to be with her Lord and Saviour on Friday, June 2, 2017, at the Salem Personal Care Home in Winkler, Manitoba. She was born on May 27, 1922 to Aron P. and Lena (Wiebe) Dyck. She graduated as a Registered Nurse in 1955, and retired from her nursing career in 1987 after 32 years. In 2010 Ruth moved from Winnipeg to Winkler to be closer to family, and in 2014 she moved to Salem Personal Care Home. She was predeceased by her parents, one sister, Annie, two brothers, Aron Dyck and Henry Dyck, sister-in-law, Ann Dyck, and sister-in-law, Susan Dyck. She is survived by a brother, Frank Dyck, sister, Lena and John Peters, sister-in-law, Evelyn Dyck, and numerous nieces and nephews. Memorial service will be held at 2:00 p.m. on Wednesday, June 7, 2017 at Wiebe Funeral Chapel, 1050 Thornhill St. in Morden. The family would like to express their appreciation to the staff at Salem Home for their compassionate care. Wiebe Funeral Home, Winkler In care of arrangements, wiebefuneralhomes.com