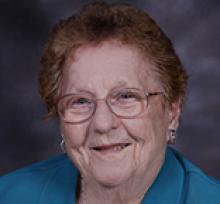 KATHERINE (KAY) STRONG (née SEMANIUK) 1924 - 2017 It is with great sadness that we announce the peaceful passing of our beloved mother, Kay, at Valleyview Care Centre, Brandon, MB, on Sunday, June 4, 2017 at the age of 92. Kay was predeceased by her husband Cliff, her parents Nicola and Annie Semaniuk, and grandson Andrew. Kay was also predeceased by all of her brothers and sisters. Mourning the absence of her passing are her children: Nelson (Cathie) of Regina, SK, Colleen Dudar (Jerry) of Winnipeg, MB and Larry (Candis) of Calgary, AB. Also left to mourn are her grandchildren: Lindsay, Brett (Amanda), Jenna (Nick) and Ian, and two great-grandchildren: Jack and Cailee. She will also be missed by many nieces and nephews. Kay was born on July 16, 1924 and grew up on the family farm north of Rossburn, along with her nine brothers and sisters. She was youngest in the family and the last surviving member of the family who immigrated from Ukraine to Canada in 1910. On November 30, 1946 Kay married Cliff and they started a life together that lasted until Cliff's passing in 1982. They moved around Manitoba with the United Grain Growers living in Birdtail, Letellier, Oakville, Swan River and lastly in Brandon, where Kay had resided for over 45 years. Kay worked as a telephone operator in Rossburn, personal care home assistant in Swan River, and retired in 1986 after 14 years of service in the sewing department at Woolco in the Brandon Shoppers Mall. Kay and her family were members of Trinity United Church where Kay was an active parishioner and volunteer. In addition, she was a member of the Rebekahs and made many friends there. In 2013 Kay moved to Valleyview Care Centre where she received wonderful care from Dr. Large. The family also appreciates the support and care Mom received from the staff at Valleyview over the past four and a half years, in addition to her care companions from We Care and Daughter on Call. A Celebration of Kay's Life will be held Thursday, July 13, 2017 at Trinity United Church, 1515 - 6th Street, Brandon, MB, commencing at 2:00 p.m. In lieu of flowers, donations in memory of Kay can be directed to a charity of your choice. Arrangements are in care of Brockie Donovan Funeral & Cremation Services, Brandon, (204) 727-0694. Messages of condolence may be placed at www.brockiedonovan.com