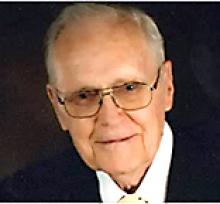 KENNETH GILBERT HOWARD Kenneth Howard passed away peacefully on June 4, 2017 at Grace Hospital with family at his side, after a brief illness. Kenneth was born in Selkirk, Manitoba, on May 30, 1925, to Louis and Ellen Howard. The second of four children, Ken had a happy childhood. His first job was as a paperboy, earning one cent per day per customer. Valedictorian at Devonshire Collegiate, Ken attended the Universities of Manitoba and Western Ontario, attaining Master of Arts degrees in French Literature and Psychology. As an undergraduate, Ken was Junior Stick of Science, then enlisted in the army. Later he joined the Reserves and became a Major. Ken worked as a clinical psychologist at the Winnipeg Child Guidance Clinic. In 1957, he became the first executive director of the John Howard and Elizabeth Fry Society of Manitoba. Later, his career focused on industrial / organizational psychology, management consulting, and outplacement. He served as presidents of both the Psychological Association of Manitoba and the Institute of Certified Management Consultants of Manitoba. Ken was a long-time sessional lecturer in Psychology and Management at Red River College and the University of Winnipeg. For many years, he wrote weekly columns for several publications. Later in life, Ken pursued his love of history, and of Selkirk and its neighbouring waterways. He interviewed more than 100 members of Selkirk's pioneer families and compiled numerous photos for his book, Stories of Selkirk's Pioneers and Their Heritage. Ken also did the layout and, in the process, became well-known and appreciated by the "geniuses" at the Apple Store. The book was launched at McNally Robinson in 2011, when Ken was 86. In recent years, Ken wrote a regular history column for The Selkirk Record. Ken married Dorothy Phimister in 1950 and had two daughters, Rosalyn and Laurel. Though divorced in the early 1970s, they shared many family occasions throughout their lives. In 1976, he married Irene Miller. For over thirty years, they enjoyed their families, gardens, and pets. Irene died in 2015. An avid swimmer and boater, Ken cherished cottage time on Lake Winnipeg, first in Ponemah and later in Gimli. He also loved music, and sang and played his violin into his senior years. Two years ago, Ken moved to The Portsmouth where he made new friends, joined the residents' council, and started a poetry club. His enthusiasm for new projects stayed strong. Ken was involved in the lives of his daughters and grandchildren, and much loved. He remained close to his siblings for nine decades, gathering regularly for high-spirited laugh-filled reunions. He will be greatly missed by his daughters, Rosalyn (Angus Braid) and Laurel (David Scott), grandchildren James, Althea, Graeme, Zander and Elena, his brother Louis (Hyacinthe Wade), sisters Claire Lee (Harold Roman) and Shirley Thompson (Greg), and numerous nephews and nieces. The family thanks the staff at Grace Hospital for their kindness and care. Celebration of Life will be held at the Portsmouth Residence, 125 Portsmouth Blvd., Winnipeg, on Friday, July 14, 2017, from 2:00 to 4:00 p.m. Ken's ashes will be buried on Saturday, July 15, 2017, at 11:00 a.m. at St. Clements Anglican Church, Selkirk. Friends and relatives are encouraged to share in a photo-tribute, stories and condolences for the family by visiting Ken's memorial page at IntegrityDeathCare.com INTEGRITY Cremation & Funeral Planning 204-295-5408 - IntegrityDeathCare.com
Publish Date: Jun 17, 2017

KENNETH GILBERT HOWARD Kenneth Gilbert Howard died peacefully on June 4, 2017, five days after his 92nd birthday, with family by his side. A Celebration of Life will be held in July. Full obituary to follow. INTEGRITY Cremation & Funeral Planning 204-295-5408 - IntegrityDeathCare.com