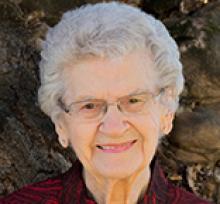 DORIS BEATRICE ELIZABETH (JONES) CLARK Doris Beatrice Elizabeth (Jones) Clark passed away peacefully, in her 96th year, with her family at her side, on Friday, June 9, 2017 at the Hamiota Health Centre, Hamiota, MB. Doris was born in the Otter district (RM of Brenda) on October 18, 1921, the daughter of Jim and Lila (Hobbs) Jones. She was predeceased by her husband of 61 years, Norman; her brothers, Fred, Howard and Clarence (Red); a sister Doreen (Hazelwood); and her grandson Kevin Clark. Mom attended Otter, Waskada and Napinka Schools. After graduation she worked as a telephone operator in Napinka, Brandon and Boissevain before raising her family. While residing in Hartney, she returned to work as an operator for MTS. Mom married Dad on June 26, 1947 and they were blessed with three sons and a daughter. During their married life they lived in several Manitoba communities making lifelong friends in each place: Boissevain, McCreary, Carberry, Hartney and Winnipeg. They retired to Kincardine, ON and in 2008 returned to their prairie roots and resided in Shoal Lake, MB. Mom was actively involved in the community, participating in the Rebekahs, Eastern Star, UCW, 4H sewing class and a leader for the United Church Explorer group. She loved visitors and always had tea and homemade goodies to serve. Mom enjoyed time with her grandchildren and great-grandchildren. She loved camping, cards, gardening and sports. Mom and Dad spent their retirement RVing throughout North America. Their travels also included a visit to the Isle of Man and the UK. Left to cherish her memory are four children: Murray (Patricia) of Shoal Lake; Joanne Barry (Chris) of Grand Bend, ON; Dan (Ann) of Brampton, ON; and Terry (Donna) of Calgary, AB; eight grandchildren: Denise Benton (James) of Elva, MB; Kathy McWhirter (Tim) of Shoal Lake; Meghan Brydges (Matt) of, ON; Jonathan Barry (Kristy) of Fort McMurray, AB; Shirley Clark of Toronto, ON; Greg Clark (Amanda) of Brampton, ON; Ashley Clark of Toronto; and Darryl Clark (Melissa) of Edmonton, AB; numerous great-grandchildren; sisters-in-law, Muriel Clark of Boissevain, MB and Ada Jones of Napinka, MB; and numerous nieces and nephews. A graveside service to celebrate Mom's life will be held at the Napinka Cemetery, Napinka, MB on Thursday, June 15, 2017 at 2:00 p.m. All are welcome to attend. A lunch will follow at the Napinka Hall. In lieu of flowers, the family would appreciate donations to the Napinka Cemetery Fund, Box 95, Napinka, MB R0M 1N0, the Hamiota Health Centre, Box 671, 177 Birch Ave. E, Hamiota, MB R0M 1T0 or to your favourite charity. The family would like to express their gratitude to the doctors and nurses at the Hamiota Health Centre for their excellent care and support during our mom's last few weeks. Arrangements in care of Redpath Funeral Home, Melita, MB. (204) 522-3361. Neil Redpath and Kurt Ardron - Funeral Directors. To send messages of condolence to the family please visit: www.redpathfuneralhome.com