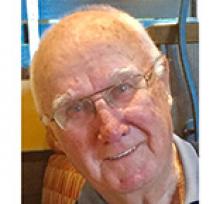 GERALD ALLAN HUDSON November 20, 1927 - May 31, 2017 It is with deep sadness that we announce that Allan Hudson passed away after a short illness, at the Assiniboine Centre in Brandon, Manitoba, at the age of 89 years. Al was born and raised in the Pinawa area and later completed school in Seven Sisters. He graduated early at age 16 and went to Winnipeg to be a millwright for Trans Canada Airlines - which later became Air Canada. In 1948 he met Winnie Broostad whom he later married in 1952. They raised three children: Debbie, Bruce and Ross. Al was an avid athlete excelling in baseball, curling and golfing. In 1980, after 36 years with Air Canada, he retired and Al and Winnie moved to Lac du Bonnet, Manitoba. He loved the outdoors both hunting and fishing. Al and Winnie spent their winters at Pine to Palm in Weslaco, Texas where they have many friends and fond memories. They moved to Brandon in 2007 where they resided till his passing. Al was predeceased by his parents Harold and Dorothy, his brothers Donald and Raymond, and his youngest sister Trish. Al will be sadly missed by his wife Winnie, of 65 years, his twin sister Marjorie, brothers George (Doreen) and Brian (Muriel), and his children Debbie (Don), Bruce (Margaret) and Ross (Caroline); grandchildren Cameron, Graeme, Greg (Krista), Jordan, Kate (Brad), Grant, Marlo (Scott) and Adam (Briar), as well as his many nieces and nephews. A private family service was held at the Minnedosa Funeral Chapel, with the final burial at the Columbarium in the Minnedosa Cemetery overlooking the rolling landscape and beautiful lake. If friends so desire, memorial donations may be made in Al's memory to the Diabetes Association of Manitoba. Minnedosa Funeral Service in care of arrangements.