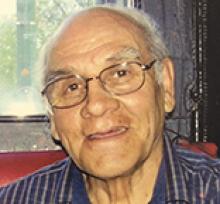 WILLIAM GEORGE COURCHENE It is with deep sadness to announce the passing of our dear Dad and Grandpa, William George Courchene. After a lengthy hard battle Dad left us in the early hours of June 18, 2017, Father's Day. Dad was born January 24, 1935 in Pine Falls, Manitoba. He was predeceased by his parents, Sophie and Ambrose Courchene and several siblings. He is survived by his brother Robert Courchene and sister Therese Swampy. He leaves to mourn his passing his loving wife of 60 years, Mary Courchene; his children and grandchildren, daughter Elaine, her daughters Dawn (Chris), Jaimie (Chris); son Jeff (Audrey) and their daughters Cheryl, April (Jeffrey), Allison (Glen); son Derek and his sons Josiah, Joshua, Daniel, Dillon and Jacob; daughter Pamela and her children Jonathan, Joel (Deeania), Stefanie and Jose; son Richard; daughter Sherri (Pete) and her daughters Alyssa (Ben) and Breanna; son Wesley (Shauna) and his sons Ethan and Drew. Dad was also blessed with 18 beautiful great-grandchildren. Dad was raised on the Sagkeeng First Nation. He had many friends and family who loved him. When he passed there were many great stories to be told and were told with fondness and love. He had a great sense of humor and his laugh was hearty and contagious. His nephews were important to him and spent many hours with them. Dad was also a surrogate grandpa to his brother Johneese's grandsons often bringing his little visitors apples and cookies. Dad had a dark moment in his history when he was forced to attend the residential school as a young boy, but he was able to take his love of sports and love of carpentry from there. He was an avid sportsman and loved hockey and later in life, found he loved downhill skiing. Dad was a carpenter by trade and he built many of the houses on the Sagkeeng First Nation. Mom and Dad married young and loved each other through thick and thin. We saw the love he had for her through the little things he would do; buy her little things she liked, long walks together, and many vacations together. Their 40th wedding anniversary celebration was a trip to Nashville and was a vacation to remember. Dad was many things to many people, but it was his family for whom he was a pillar of strength. He was the best dad and grandpa anyone could ever hope for as he loved us BIG MUCH and protected us fiercely. He was gentle, kind and would do anything for us. It was not often he would get cross with us, but if he did it was funny to us as anger did not fit on him. His greatest joys were his grandchildren and great-grandchildren. They are a testament to who he was as a man and father. Dad / Grandpa, we will love and miss you forever. Our lives are a like a comic book because whenever we are in trouble, we are always saved by a hero called dad. We love you. A funeral service celebrating his life will be held June 22, 2017 at 12:30 at the Roman Catholic Church on the Sagkeeng First Nation. Final viewing will begin at 11:30 a.m. Interment will follow in church cemetery. Condolences may be sent to the family c/o Spirit Road Funeral Services Inc., PO Box 200, Fort Alexander, Manitoba, R0E 0P0, 204-340-6490 or friends may leave a message of sympathy at spiritroadfs@shaw.ca.