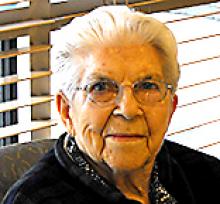 EVANGELINE HAZEL MAGILL October 12, 1922 - June 14, 2017 Evangeline Hazel Magill passed away at River Park Gardens in Winnipeg on June 14, 2017 at the age of 94 years. She is survived by her daughter Marilyn Baskier (Ed) and sons, Melvin Magill (Darlene), Brian Magill (Diane), and Doug Magill. She will also be greatly missed by her grandchildren, Jacque Baskier (Robert Pasternak), Barb Hayes (Phil), Eldon Baskier (Rena), Danny Magill, Allan Magill, Tyson Magill, Travis Magill, and Brittany Magill (John Zoochkan) and great-grandchildren, Arlo (Wilson), Zorya, Annachie, Ada, Sonny, and Wesley and two great-great-grandchildren, Eduardo and Carolina. Eva is also survived by one sister-in-law Jean Brown as well as many nieces and nephews. Eva was predeceased by her parents, Thomas and Amy Booth, first husband Christopher Brown, husband Wesley Magill, her brothers, and all of her many sister/ brothers-in-law from the Booth, Brown, and Magill families. Mom was born October 12, 1922 on a farm near East Bay, MB. She was the youngest of four children and they lived in the East Bay/Laurier area until she was 12 years old. The decision was made to move to the Swan Valley and a better future. Eva helped drive the teams and herd the cattle on the long move to the valley while her brothers rode ahead on bicycles to assess the prospects. She lived in the Renwer area after she married, but upon the passing of Christopher Brown and the subsequent marriage in 1949 to Wes Magill, she moved to their new farm on the Lenswood Road. She continued to live and farm there raising grain, cattle, pigs, chickens, and kids until she had to move to Swan River when Wes became ill. She took up a job as a health care aide and continued for 11 years, retiring in 1984. In 1990 she journeyed to Sydney, Australia for a vacation with her brother Wilbert and family. Eva then lived in Swan River and kept a garden on the farm until she purchased a house in Swan River when she was able to have her garden there. She spent lots of time visiting family and friends and gardening. In 2005, Mom moved to Winnipeg to be closer to family and to make it easier to make it to appointments. The bus ride and occasional airplane ride had become too much for her. She moved into an apartment on Grant Avenue, then to assisted living in St. Vital in 2009, and finally into River Park Gardens in 2013. She kept active with family, friends, and the many outings sponsored by the residences during this time. Eva lead a long and fulfilling life as a sibling, daughter, wife, mother, grandmother, great-grandmother, and great-great-grandmother. She preferred to stay in the background but was always there to lend a hand or simply hold a hand for anyone that needed it. We all loved her and will deeply miss her. A special thanks to all the wonderful staff at River Park Gardens for their compassionate and continuous care throughout her years with them. A memorial service was held from the Chapel of Swan Valley Funeral Services, Swan River, Manitoba on Wednesday, June 21, 2017 at 11:00 a.m. with Reverend Kathy Highmoor officiating. Interment took place in the Minitonas Cemetery, Minitonas, Manitoba. Should friends so desire, donations in Eva's memory may be made to CancerCare Manitoba Foundation. Swan Valley Funeral Services Ltd 363 Kelsey Trail Swan River, MB R0L 1Z0 734-5775 www.swanvalleyfuneralservices.com