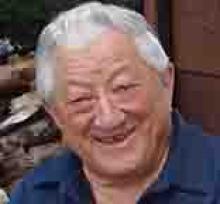 JAMES ADRIAN MUTCHESON 1925 - 2017 "No man stands so tall as when he stoops to help a child." Surrounded by the love and devotion of his family near and far, James Adrian Mutcheson passed away in the early morning hours of Wednesday, June 21, 2017. He was a most special gift to all of us for 91 years. Dad is deeply mourned by his wife of 68 years Sylvia, children, Heather (Richard Condo), Ray (Candace), Laura (Ray Rawlings), Jim (Loretta), Jack (Janice), Joey (Jill) and Matthew (Crystal), and children and grandchildren. Dad was predeceased by his beloved son Michael James Mutcheson (Maureen). During his 68 years in Morden, Jim created a rich and full legacy of community service. A decades-long active member who served as President of the Royal Canadian Legion, he was bestowed the rare Meritorious Service Medal by National Command for his devotion and life-time service to the Legion and many local charities it supports. Dad was also awarded the Lifetime Membership, in recognition for his service to the Royal Canadian Legion and the community. He worked untiringly at coaching and developing sport in the community. In 1964 Morden named him Citizen of the Year. It marked a pinnacle in his life. His dedication and tireless work in sport with children, led him to be inducted into Manitoba's Baseball and Sports Hall of Fame. In spite of all of his community work, nothing took a back seat to his family, and he was actively and fully invested in the lives, personal achievements and interests of his children, grandchildren and great-grandchildren of whom he was so proud. Dad's gifts of laughter, generosity and love for life enriched all of us in ways beyond measure. To know Dad, was to admire him. You will be greatly missed! Special gratitude to the amazing team of nursing and care staff at the Boundary Trails Health Centre for their compassion, and sensitive and attentive personal care during Dad's last two weeks. Immense thanks to Dr. Bob, Dr. Kauenhofen and Dr. Woelk who defined the meaning of compassionate and respectful medical care. A celebration and mass for Jim's rich life will take at St. Paul's Church, 353 Thornhill St. in Morden, MB. This event will take place Tuesday, June 27 at 2:00 p.m. In lieu of flowers, donations in honour of Dad can be made to CancerCare Manitoba or to the Boundary Trails Health Centre Foundation designated to palliative care. Wiebe Funeral Chapel, Morden In care of arrangements wiebefuneralhomes.com