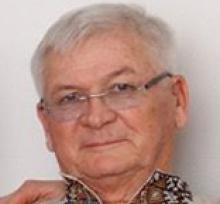 JOSEPH JOHN REBIZANT With heavy hearts and profound sadness, the family would like to announce the sudden passing of our beloved husband, father and grandfather, Joseph John Rebizant, at the age of 81, on June 25, 2017, close to the family home near Malonton. Joseph will be deeply missed by his loving wife Lulu (née Guttormson); sons Ken (Marlene), Terry (Susan) and Chris (Sue); grandchildren Jessica (fiancé Chris), Michael and Joseph; Jane, Thordur and Hanna; and Hunter; and by his brother Russell (Lorraine); as well as many close relatives and friends. Dad was predeceased by his parents, George and Kathleen (née Gutowski), and his brother, David. Dad was born on Friday, March 13, 1936 in Selkirk. He started his teaching career as a permit teacher in Kilkenny, Manitoba in 1953. He went on to earn a B.Sc., a B.Ed., and an M.Ed at the University of Manitoba. Dad taught at several schools in the River East School Division before moving to Teulon. He taught Mathematics at Teulon Collegiate Institute, ending a long successful career as the principal, retiring in 1993. Dad loved the great outdoors. He was an avid hunter and fisherman. He also enjoyed scuba diving, travelling to the Caribbean, and spending winters in Texas with Mom. Dad was very proud of his Ukrainian heritage, and was a fantastic cook in his later years. He was a community minded man, serving many years as a volunteer ambulance driver, and a coach on his sons' baseball teams. In our eyes, Dad was the greatest husband, father, grandfather and hunter. "I have had a very good life." A Memorial Mass will be held on Friday, June 30 at 10:30 a.m. in the Holy Eucharist Ukrainian Catholic Church in Selkirk (380 Sophia Street), with Father Peter Chorney officiating. The family would like to thank the RM of Armstrong fire department, the R.C.M.P., the Stonewall Ambulance Services, the staff at the Gimli Hospital, and especially the heroic efforts of Neil and Elwin Smerchanski for trying to save Dad. Mom would like to thank her neighbours for coming to the house and escorting her to the hospital to see Dad. In lieu of flowers, a donation to the Manitoba Heart and Stroke Foundation, or a charity of one's choice, would be appreciated. Vichnaya Pamyat Condolences may be left at www.gilbartfuneralhome.com Gilbart Funeral Home, Selkirk in care of arrangements.
Publish Date: Jun 28, 2017