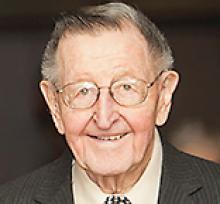 ROBERT BOCKSTAEL February 15, 1923 - June 28, 2017 It is with deep sadness that we announce the passing of Robert Bockstael on Wednesday, June 28, 2017 surrounded by friends, in the chapel at his residence at Villa Aulneau. He will be deeply missed by his daughters, Roberta Dick and Sheila; sons, David (Jackie), Larry (Irene), John (Monique); 15 grandchildren, Kevin (Rebecca), Cathy (Ifti), Trevor (Jodi), Greg (Lindsie), Michael (Suzanne), Erika, Erin (Jean-Luc), Alison, Jeffrey, Andrew (Nikki), Sandra (Jed), Cameron, Nicholas (Stephanie), Daniel (Laneil), Sarah (Tom), and 17 great-grandchildren. He also leaves to mourn one sister Jeanne DeCruyenaere. Robert was born on February 15, 1923 to his parents, Theodore and Marie Bockstael (nee VanBelleghem) and lived his entire life in St. Boniface. He was predeceased by his wife of 70 years, Marietta, his half-siblings: Martha, Albert, Gus, Omer and Irene and siblings George and Joseph. Robert was a devoted husband, father, and grandfather. His Catholic faith was the foundation for how he lived his life. Robert was a terrific storyteller with an incredible memory for names and details. He had a long and vibrant career at the helm of Bockstael Construction and in politics. He was known in the community for his integrity as a businessman, school trustee, city councillor and Member of Parliament for St. Boniface. The family would like to extend a heartfelt thank you to the caring personnel and residents at Villa Aulneau, to his physician, Dr. Michael Cummings, Dr. Sinha and the entire Cardiology Department at St. Boniface Hospital for the care and support given to our father. A funeral mass celebrating Robert's life will be held Thursday, July 6, 2017 at 10:45 a.m. in the St. Boniface Cathedrale, 190 Avenue de la Cathedrale. Reception to follow. In lieu of flowers, if friends so desire, donations in memory of Robert may be made to the St. Boniface Hospital Foundation in support of Cardiac Sciences. E.J. COUTU & CO. FUNERAL DIRECTORS 680 Archibald Street 204-253-5086 ejcoutu.com
Publish Date: Jul 4, 2017

ROBERT BOCKSTAEL It is with deep sadness that we announce the passing of Robert Bockstael on Wednesday, June 28, 2017, surrounded by friends, in the chapel at his residence in Villa Aulneau. In keeping with Robert's wishes, cremation has taken place and a funeral mass celebrating his life will be held on Thursday, July 6, 2017 at 10:45 a.m. in the St. Boniface Cathedral, 190 Avenue de la Cathedrale. Longer obituary will follow in the Tuesday, July 4 edition. E.J. COUTU & CO. FUNERAL DIRECTORS 204-253-5086 ejcoutu.com