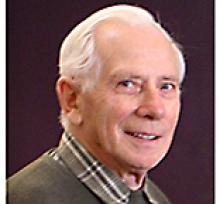 MICHAEL AMBACH Following a lengthy illness, it is with great sadness that the family of Michael Ambach announces his passing Wednesday, July 5, 2017, at Rockyview General Hospital in Calgary, at the age of 90. He will be missed by his wife, Elizabeth (nee Konzelman), his sons Mark and Rolfe (Fran) and their son, Michael. He was predeceased by his parents John and Maria in 1968; by his sister Christina Sessan in 2006, and by his brother Alois in 2014. Michael was born July 12, 1926 in the small village of Krndja in the former Yugoslavia. He grew up in modest beginnings as the family struggled to farm the small parcel of land they owned. While Michael was a young boy, his father John left for Winnipeg to pursue a better life in the hope of bringing the family over. Michael expressed his love for music at a very early age. He tried his hand with various instruments including the violin, but it was the tenor horn that captured his imagination. He joined a local band and the troupe travelled from town to town playing at weddings and other events. The Second World War separated the family. Following the war, his father initiated efforts to bring his family to Canada, and Michael immigrated in 1949 under refugee status. Now at the age of 23, he rejoined his parents, brother and sister in Winnipeg. In 1951, he married his beloved Elizabeth and together they raised two sons, Rolfe and Mark. Michael was always a loving and loyal husband and immensely proud and protective of his family. When his grandson, Michael was born in 1992 he was overjoyed and took great pleasure in spending time with him when he could. Michael was an ambitious man and was determined to succeed as the opportunities in Canada presented themselves. He initially apprenticed as a plasterer, but his working career would start to take shape when he was hired by Shea's Brewery in 1951 which eventually was purchased by Labatt's Brewery. While working at the Winnipeg plant Michael completed his schooling and quickly moved up the ranks eventually acquiring certification by the Master Brewers Association of America. He was promoted to Production Manager of the bottling operation and transferred to the Saskatoon plant in 1969. He remained there until his retirement in 1992. His musical interest never waned and after a 36-year hiatus, again picked up the tenor horn to play with the German Canadian Club while in Saskatoon and after his retirement to Winnipeg. Michael will always remain in our hearts and will be remembered as being generous to a fault, a hard worker, and a devoted family man whose positive attitude would provide inspiration to family and friends alike. The family wishes to thank the staff at Rockyview General Hospital in Calgary, and the Health Care workers that assisted him as his illness progressed. A private interment will take place on Friday morning, July 14. A memorial service will take place at Abundant Life Lutheran Church, 3486 Raleigh Street, Friday, July 14 at 1:00 p.m. In lieu of flowers, if desired, donations in Michael's memory can be made to Abundant Life Lutheran Church or a charity of your choice. KLASSEN FUNERAL HOME 1897 HENDERSON HWY 204-338-0331 Condolences may be sent to www.klassenfuneralhome.com