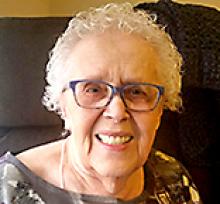 MARY ANTONYSZYN May 7, 1924 - July 16, 2017 At the age of 93, Mary entered into eternal peace. She was predeceased by her parents, Michael in 1954 at the age of 66, and her mother Wasalena (nee Dowhaniuk) in 2005 at the age of 106. She lost her brother Elie in the Second World War in 1945 at the age of 22, who's buried at the Holten Canadian War Cemetery in the Netherlands, and sister Olga in 1997 at the age of 64 to cancer. Mary lived her life according to the poem 'The Dash' by Linda Ellis - "and now only those who loved her know what that line is worth". From her stories of when she was a child living in Rorketon, MB, racing her brother Elie home from school, or when he dared her to walk across a frozen pond for 25¢, her stories about her brother were full of admiration. Her sister Olga was a gymnast, and Mary could never figure out how she could contort her short little legs the way she could, or how her sister could be curious in so many different interesting hobbies, like being a pilot or just knowing how to create lacework. She adored her parents, they worked hard all their lives and loved their children equally. Her Dad would work from dawn to dusk on their farm and would never scold her, except for the time she wore red nail polish and he didn't think "that was a very nice thing for a young lady to do". Her Mom could make a delicious meal out of very meager ingredients, and keep the house spotless with three very rambunctious children. Mary's first job was a teacher at Lake Dauphin, she was proud of being able to help so many with being able to read and write. She would start most of her stories with how much she made a week in pay, and would always threaten to call Ottawa to get all her money back because she only made $2.45 a week back then. She then went to live in Winnipeg and took an Administrative and Shorthand course, and worked a Government job at the Legislature Building. She would always get in trouble from her boss for getting back to her desk late from lunch because she was gathering the cards from their daily card game of Whist. She then went to Toronto with her sister Olga and started working for Air Canada. She loved the big city life in Toronto, but returned to Winnipeg to take care of her mother after her father's passing. She retired from Air Canada in 1989 after 35 and a half years of service. In her retirement years, she loved going to the Assiniboine Downs and betting on the horses. She loved when luck was on her side, but never mentioned any of the times she lost. She enjoyed watching the Winnipeg Blue Bombers on the television, and knew all of the old and new current players by name and what position they played. She had a secret crush on Anthony Calvillo, the former quarterback for Montreal; she would blush every time his name was mentioned. As Mary got along in years, and all of her immediate family was gone, she asked her cousin Natalie to assist her. Mary adored her little cousins Colby and Sydney, and loved to banter with Gary. We love her so much and always will. In accordance to Mary's wishes, cremation has taken place and a private graveside service will take place in Toutes Aides, MB at a later date. VICHNAYA PAMYAT KORBAN FUNERAL CHAPEL 204-956-2193 www.korbanchapel.com