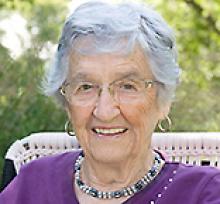 HELEN IRENE GARDINER (LEECE) 1922 - 2017 Mom died on July 18 having just celebrated her 95th birthday the week before with a family baseball game in Clearwater Park. She was born on June 27, 1922 near Holmfield, Manitoba to Jack and Jean Leece. Mom was the oldest of three girls and was raised with Gwen and Doris on the farm north of Holmfield. She spent some of her teenage years in Cartwright. After high school Mom attended 'Normal School' in Winnipeg, training as a teacher. She taught in Pilot Mound and Winnipeg and eventually at 'The Oaks' school north of Clearwater, boarding with Jack and Frances McKellar. It was there that she met our father Ronald Gardiner. They married in 1944 and began their married life on the farm south of Clearwater. It was there they raised five sons. Mom and Dad moved off the farm and into town in 1975. Mom spent the next 40 years living in Clearwater. Mom had an abiding and deep passion for music and relationships, and her family, which now includes 16 grandchildren and 16 great-grandchildren. She sang and played the piano and organ, playing 'by ear' or by 'note'. We were always amazed at how she could listen to a song and then play it on the piano. Mom's memory was a legend in the family. She could remember birth dates and names for all kinds of people, where she had met them and how people were connected to one another. That is history we all relied upon and will miss. Mom always followed various sporting events especially in Clearwater where one of her family would be involved with a Clearwater team. Mom was involved in the UCW, played the organ in church and for various events, supported and enjoyed the local Harvest Moon community, was a proud member of the Clearwater 'Senate' and sang in the choir at the United Church. Mom never had any daughters and loved and considered her daughters-in-law, Sandi, Angela, Jo-Lene, Louise and Marianne, as her daughters. We would like to thank those who helped care and support Mom in her last few years - all the home care ladies with whom she loved to socialize, her caregivers in the Pilot Mound Lodge, Flora, her special friend who visited her daily in Clearwater, and Arnie, whose friendship brightened her life while she lived in the lodge. Mom was predeceased by our dad in 1986 and by her sister Gwen and daughter-in-law Marianne. Mom had a great life and we feel fortunate to celebrate that. A memorial service will be held on Sunday, July 23, 2017 at 7:00 p.m. at the Clearwater Memorial Hall in Clearwater, Manitoba. Private interment will take place at the Clearwater Cemetery. In lieu of flowers, we would appreciate donations to the Manitoba ALS Society 2A - 1717 Dublin Avenue, Winnipeg, Manitoba R3H OH2 or to Clearwater Foundation, Box 112, Clearwater, Manitoba ROK OMO. Messages of condolence may be made online at www.wheatlandfs.com Wheatland Funeral Service (204)825-2848 www.wheatlandfs.com