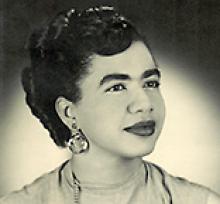 GLORIA YVONNE ROBINSON (née MCMORRIS) March 31, 1927 - July 22, 2017 With customary grace, Gloria died peacefully in her sleep at the age of 90. She was the middle child of three children born to Doris Maud McMorris (née Roberts) and Eric Alexis McMorris in Saint Andrew, Jamaica. She was predeceased by her husband, Julian Robinson, and her brothers, Vayden McMorris and Clinton McMorris. Left to grieve Gloria are her daughter Margaret Robinson, and grandsons Darcy and Aaron Gudmundson. Equal parts caring and tireless, Gloria was special both as a wife and mother, and as a career woman. She was kind, gentle and patient to the core, with an endless reserve of drive, will and talent. Gloria began her nursing career as a midwife in Jamaica and went to New York to continue her studies. She married Julian in 1954 and together they moved to Winnipeg where she was granted landed immigrant status in February of 1955. The same year Mrs. Robinson became an Active Practicing Member of the Manitoba Association of Registered Nurses. The rest is the story of a genuine Canadian trail-blazer who became one of the first non-white Directors of Nursing in Canada upon joining the team at The Sharon Home, in 1966, at its original location on Magnus Avenue. She retired at the age of 70. Her family and extended family in Jamaica were always in her thoughts and she paid regular visits to them and hosted many of them at her lovely home in Winnipeg. An outstanding person attracts outstanding friends and "Vonnie" made many of them during her life in Winnipeg. Gloria would want to thank her caregiver, Jacqueline, for the loving care provided for the past year, and also the Dialysis Unit at Health Sciences Centre. In lieu of flowers, please make a donation in Gloria's name to the charity of your choice. Funeral service and interment will be held at 2:00 p.m. on Friday, July 28, 2017 at Glen Eden Memorial Gardens & Funeral Home, 4477 Main St., West St. Paul, MB. Glen Eden Funeral Home (204) 338-7111