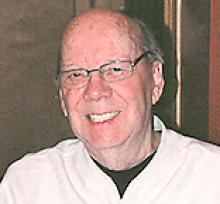 DONALD JOSEPH SMITH It is with sadness, but also comfort, that we announce the peaceful passing of Donald Joseph Smith, aged 87, at Rest Haven Nursing Home in Steinbach, MB, on July 20, 2017. Don was born in 1930 and raised in East Kildonan, Winnipeg. He had a successful 43 year career with the North West Company as Director, Store Planning, for their Northern Stores Division (formerly part of the Hudson's Bay Co.). It was at work that Don met his beloved wife to be, Donaleen. Don and Donaleen were married in 1960 and created a loving home in Fort Garry where they encouraged hard work, school and sports for their children, Shelleen and Chad. Don worked long hours but also put much effort into his family, including sports and home design. He was very involved with tennis, including the Winnipeg Lawn Tennis Club, for many years. Don also had a passion for downhill skiing. He shared this passion with his family through annual trips to the mountains and weekend trips to their wonderful "ski shack" at what was Mount Agassiz ski resort, near McCreary, MB. In October 2004, Donaleen and Don started a new chapter when they sold their home in Fort Garry and moved to their condo on Wellington Crescent. Don was in his element, creating a new beautiful space for them to enjoy for another 10 years. Health challenges brought Donaleen and Don to Riverwood Square for two years of assisted living, before moving to Steinbach, MB, in December of 2016. In late February 2017, Don was admitted to Bethesda Regional Hospital, where the family appreciates how graciously and wonderfully he was cared for. The family's gratitude also extends to the team at Rest Haven Nursing Home who supported the entire family (not just Dad) through the last two weeks of his life. Don was predeceased by his elder brother, Gordon Smith, and his son-in-law, Keith Van Iderstine. Don is survived by his loving wife, Donaleen, daughter Shelleen (Eldon) Stoesz, son Chad, Eldon's daughter Kali (Chip) Martens, grandson Connor Stoesz and great-granddaughter Olive Martens. A Celebration of Life will be held at a later date. Don's interment will be a private function, but if you wish to share your thoughts or contact the family, please do so at www.klassenfuneralhome.com In lieu of flowers, any donations to the Canadian Cancer Society would be welcomed. KLASSEN FUNERAL HOME 1897 HENDERSON HWY 204-338-0331 Condolences may be sent to www.klassenfuneralhome.com